There are lot of lessons from the past that have been forgotten as we have become more and more reliant on electricity to power things like refrigerators and freezers. But in planning for a disaster that may take away that electrical power, it is a good idea to look backwards to see how our ancestors dealt with keeping things cold in the heat of the summer.

One solution from olden times was the use of ice houses or other places that ice could be kept until needed. See From Ice House to Refrigerator:


While ice caves, ice pits and spring houses and other structures have a much longer history, the commercial development of ice cooling is peculiarly American. Even in colonial America drinks would be served with a block of ice.

In 1637 Sir William Berkeley, governor of Virginia, was granted a patent “to gather, make and take snow and ice and keep the same in such pits, caves and cool places as he should think fit.” This patent gave him a monopoly on the sale of snow and ice in Great Britain for the next fourteen years. The monopoly was renewed by King Charles in 1665.

Ice-houses became an essential part of American culture. In New England, eighteenth-century farmers cut ice from local ponds and rivers to preserve their apples and vegetables in underground ice-houses. In 1792, Thomas Jefferson subscribed to the ice service in Philadelphia of James Oeller's Chestnut Street Hotel for a shilling a day. Oeller’s hotel had a tradition, noted by British visitors of serving punch with a block of ice.

Robert Morris, whose home in Philadelphia was used as the presidential mansion until the capitol moved to Washington DC, had an ice pit where food could be preserved and ice stored for cooling drinks. George Washington modeled his ice-house at Mount Vernon on that of Robert Morris. But southern plantation owners, including Washington, needed to experiment with insulation materials to preserve the ice. Confronted with an inadequate ice supply, Washington wrote to Morris, noting “The House I filled with ice does not answer, it [the ice] is gone already.” Even after reconstructing his ice-house in 1784 he noted that “not the smallest particle” remained by June. 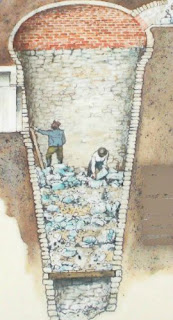 Washington failed to understand the need for proper insulation of the ice in warmer climates. Morris provided him with crucial advice: “The Door for entering this Ice house faces the north, a Trap Door is made in the middle of the Floor through which the Ice is put in and taken out. I find it best to fill with Ice which as it is put in should be broke into small pieces and pounded down with heavy Clubs or Battons such as Pavers use, if well beat it will after a while consolidate into one solid mass and require to be cut out with a Chizell or Axe. I tried Snow one year and lost it in June. The Ice keeps until October or November and I believe if the Hole was larger so as to hold more it would keep until Christmas.”
***
Beginning in 1799, ships carrying New England ice, insulated in sawdust, brought ice to the warmer regions of the American South and later to Caribbean Islands. Still later ice was delivered to plantation ice-houses down the Mississippi River from ice ponds in the upper Midwest. As plantation owners learned to insulate their stored ice with grass or later sawdust, ice-houses were used to store food throughout the South. Inside the icehouses, plantation owners would store barrels of brandy, pickles, preserves, cider, milk, butter and other perishable foods.

What we see is that it takes some planning to set aside ice for use - but that the use of insulation - like sawdust - can help preserve the ice for long periods of time. In the right climate, that might be from ice season to ice season.


A cuneiform tablet from c. 1780 BC records the construction of an icehouse in the northern Mesopotamian town of Terqa by Zimri-Lim, the King of Mari, "which never before had any king built."[2] In China, archaeologists have found remains of ice pits from the seventh century BC, and references suggest they were in use before 1100 BC. Alexander the Great around 300 BC stored snow in pits dug for that purpose. In Rome in the third century AD, snow was imported from the mountains, stored in straw-covered pits, and sold from snow shops. The ice formed in the bottom of the pits sold at a higher price than the snow on top.

In any event, it is a doable thing.

Mother Earth News has ice house plans at How to Build an Ice House.

Some interesting thoughts and suggestions from The SurvivalistBlog including a good idea in the comments about how to save ice in areas where it gets cold enough to freeze water but not to freeze ponds enough to allow for ice harvesting:


I would think if you used ‘white’ buckets you could store clean water & ICE. Two birds…. with one bucket. He filled and let nature freeze then stacked them 3 and 4 high by 2 deep all around his ‘Cold Room’. Seems along the same line as ‘tubs’. I’m liking the bucket ice house this fellow built. 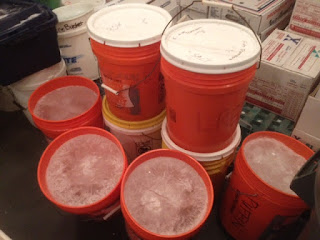 
These bucket-shaped ice blocks were made by the National Aquarium in Washington DC in preparation for Hurricane Sandy. If they had lost power these would be instrumental in regulating water temperatures for their aquariums.


Of some interest is this pdf Snow Storage for Cooling of Hospital.

One key point is that the time to preserve the ice you already have on hand in the event of an emergency is to get it into well insulated containers in proper storage as soon as you can. If you have time and space , like the National Aquarium did prior to Sandy, make some.
Posted by Mark Tempest at 6/03/2015 01:25:00 PM