18 June will be the 200th Anniversary of the battle of Waterloo, fought in present-day Belgium.

Just in time, a regular guest to Midrats, John Kuehn,  has his latest book out, Napoleonic Warfare: The Operational Art of the Great Campaigns where he covers the operational level analysis of European warfare from 1792 to 1815, including the tactics, operations, and strategy of major conflicts of the time.

More than just a description of set piece battle, there is a discussion of naval warfare, maneuver warfare, compound warfare, and counterinsurgency.

We've got him for the full hour ... we should be able to get to most of it.

Dr. John T. Kuehn is the General William Stofft Chair for Historical Research at the U.S. Army Command and General Staff College. He retired from the U.S. Navy 2004 at the rank of commander after 23 years of service as a naval flight officer in EP-3s and ES-3s. He authored Agents of Innovation (2008) and co-authored Eyewitness Pacific Theater (2008) with D.M. Giangreco, as well as numerous articles and editorials and was awarded a Moncado Prize from the Society for Military History in 2011. 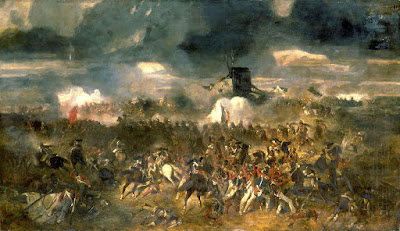 His previous book was, A military History of Japan: From the Age of the Samurai to the 21st Century.