On Midrats 9 August 2015 - Episode 292: The Force of the Future w/Acting Under SECDEF Brad R. Carson 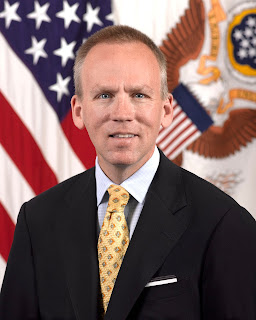 
If people are your most important asset, as the hardware people look to a future of F-35s, SSBN(X), and the FORD Class CVN, what are the steps being taken to set of the personnel structure to address future requirements?

Our guest to discuss this and more for the full hour will be Brad R. Carson, Acting Under Secretary of Defense for Personnel and Readiness.

Mr. Carson was appointed by President Obama to serve as the Acting Under Secretary of Defense for Personnel and Readiness on April 2, 2015. He currently serves as the 31st Under Secretary of the United States Army and Chief Management Officer of the Army.

He has previously served as General Counsel of the Department of the Army Special Assistant to the Secretary of Defense, member of the U.S. Congress representing the 2nd Congressional District of Oklahoma, academia, and a lawyer in private practice.

His military service includes a deployment in support of Operation IRAQI FREEDOM December 2008 until December 2009, as a United States Navy intelligence officer.

Join us live if you can or pick the show up later by clicking here. The show will also be available for later listening at our iTunes page.
Posted by Mark Tempest at 8/07/2015 08:24:00 AM