A Vietnamese fishing boat from the central province of Quang Ngai was operating in the Vietnamese waters in the East Vietnam Sea on Friday when it was reportedly attacked by three Chinese ships, local authorities said. 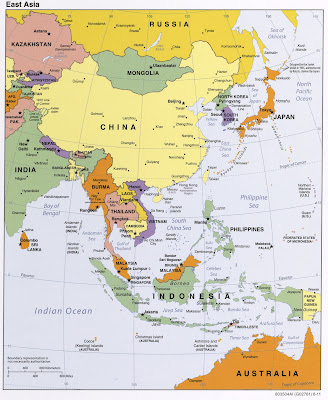 These Chinese ships got close to the QNg 96507 TS, with 16 fishermen on board, when it was fishing off Vietnam’s Hoang Sa (Paracel) archipelago, the authorities of the province’s Ly Son District said on Saturday, citing a report from the attacked boat’s captain, Nguoi Lao Dong (Laborer) newspaper reported.

Crew members of the foreign ships, which were in white and coded with 46102, 45101 and 37102, got on board the local boat, with AK assault rifles and electric batons in their hands, said captain Nguyen Loi.

These Chinese then beat a number of the fishermen with their weapons, causing injuries to them, Loi said.

The foreigners also smashed navigation equipment and fishing tools on the local ship, and took away all the aquatic products from it.

This report is covered by the U.S. Office of Naval Intelligence in its Worldwide Threats to Shipping report of 6 August 2015 (pdf).

In most of the world, fishermen do occasionally spar over fishing areas, but this reported incident has some interesting characteristics. First, the Chinese fishermen had weapons - "AK assault rifles and electric batons" - and this, with the Chinese, heavily implies some sort of official sanction in having fishing boats so equipped - though many near coastal fishing boats do carry some sort of weaponry to fend off sea robbers, this has the feel of something more.

In addition, as well set out by James Kraska in his Diplomat article, "China’s Maritime Militia Upends Rules on Naval Warfare: The use of fishing vessels as a maritime militia has profound legal implications":


With 200,000 vessels, China operates the largest fishing fleet in the world, and its commercial industry employs 14 million people – 25 percent of the world’s total. This massive enterprise operates in conjunction with the armed forces to promote Beijing’s strategic objectives in the South China Sea and East China Sea. The militia, for example, were involved in the 1974 invasion of the Paracel Islands, as well as impeding freedom of navigation of U.S. military survey ships. The maritime militia also provides logistics support to Chinese warships. In May 2008, for example, militia fishing craft transferred ammunition and fuel to two warships near Zhejiang Province.

Fishermen are assigned to collectives or attached to civilian companies and receive military training and political education in order to mobilize and promote China’s interests in the oceans. The fishing vessels of the militia are equipped with advanced electronics, including communications systems and radar that supplement the PLAN force structure and enhance interoperability with other agencies, such as the China Coast Guard. Many boats are equipped with satellite navigation and can track and relay vessel positions, and gather and report maritime intelligence.

The fleet support missions being undertaken by China’s maritime militia may make fishing vessels lawful targets during armed conflict, with potentially tragic consequences for legitimate fishermen from China and nearby states. This is an example of China’s “legal warfare,” which is the perversion of legal concepts or processes to counter an opponent. Unlike the Philippines’ arbitration case over China’s dashed line, which is not “legal warfare” because it simply seeks a legal determination based on the rule of law, the maritime militia exploit seams in the law and thereby place at risk the very civilians that the law is made to protect. (emphasis added)


China operates a distributed network of fishing vessels that are organized into a maritime militia to support the People’s Liberation Army Navy (PLAN). The militia is positioned to conduct a “people’s war at sea” in any futureconflict. This strategy exploits a seam in the law of naval warfare, which protects coastal fishing vessels from capture or attack
unless they are integrated into the enemy’s naval force. The maritime militia forms an irregular naval force that provides the PLAN with an inexpensive force multiplier, raising operational, legal and political challenges for any opponent.
***
In a meeting last year, a former admiral of a blue water naval force in Northeast Asia said off the record that Chinese fishing vessels operate with military personnel on board — a point seconded by the retired chief of navy of a Southeast Asian State now at odds with China over maritime claims.
***
China believes that a civilian militia composed of fishing vessels may be a less provocative means of promoting its strategic goal of regional hegemony. During peacetime, this approach is likely correct since fishing vessels are not instruments of war. Opposing States are less inclined to mobilize to resist fishing vessels in the same way they would resist foreign warships. (emphasis added)

Well, that may be true to a point. But it seems to me to be a very short step from identifying the Chinese bullying tactics and the placement by the PLAN of armed troops on fishing boats for those threatened states to respond by placing their own armed military or quasi-military forces onto to their own fishing fleets and thereby potentially escalating matters with some rapidity.

I highly recommend reading the two Kraska pieces in their entirety - these are not dry law review articles concerning the meaning of the placement of an "and" instead of an "or" in some part of the Bankruptcy Code, but rather the analysis of Chinese efforts to push the limits of international law (not that international law seems to restrict great powers all that much, a cynic would say).

The greater point is there is more to worry about than just interference with regional fishing fleets in China's actions.
Posted by Mark Tempest at 8/10/2015 11:58:00 AM