Saturday Is Old Radio Day: "Let George Do It" 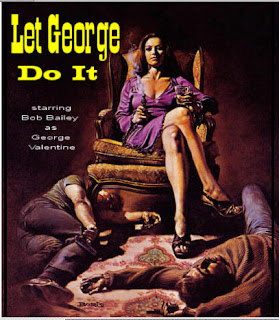 Let George Do It:


Let George Do It was a radio drama series produced by Owen and Pauline Vinson from 1946 to 1954. It starred Bob Bailey as detective-for-hire George Valentine (with Olan Soule stepping into the role in 1954).

Clients came to Valentine's office after reading a newspaper carrying his classified ad:

Personal notice: Danger's my stock in trade. If the job's too tough for you to handle, you've got a job for me. George Valentine.

The few earliest episodes were more sitcom than private eye shows, with a studio audience providing scattered laughter at the not-so-funny scripts. Soon the audience was banished, and George went from stumbling comedic hero to tough guy private eye and the music from wah-wah-wah to suspenseful.

Here's "The Little Man Who Was Everywhere"