Fighting ISIS: "War on IS needs 'boots on ground': US air force secretary" 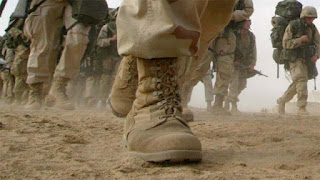 "War on IS needs 'boots on ground': US air force secretary":


"Air power is extremely important. It can do a lot but it can't do everything," James said.

"Ultimately it cannot occupy territory and very importantly it cannot govern territory," she told reporters at the Dubai Airshow.

James cited the "Iraqi army, the Free Syrians and the Kurds" as forces to support in the fight against IS.

And, maybe the French, the U.S., the Germans, etc?

As quoted and commented on here, T.R. Fehrenbach wrote :


Americans in 1950 rediscovered something that since Hiroshima they had forgotten: you may fly over a land forever; you may bomb it, atomize it, pulverize it and wipe it clean of life—but if you desire to defend it, protect it and keep it for civilization, you must do this on the ground, the way the Roman legions did, by putting your young men in the mud. ”
Yep, our young men with their ideals against their young men with theirs.

For most, if not all, the marbles.

Be careful in your choice of allies, Madam Secretary, though, as was discussed in Fighting ISIS and al Qaeda: Choosing Poor Allies Is Not Helpful after some of our early "allies" cut and ran or defected:


Given the long history of rapidly changing alliances in the region this result probably shouldn't be exactly - you know - shocking. However, it does point out - once again - the problem of first world thinking meeting third world tribal and cultural standards head on.

These "allies" are fighting for what, exactly?

It certainly isn't for the glory of Syria or mom and apple pie.

Motivation being what it is and given that Mao's precept that "Political power grows out of the barrel of a gun," applies to tribal and religious struggles in the Middle East as well as to communist insurgencies, these former and current allies basically are fighting for power and profit, while the other side seeks to replace the status quo ante with themselves, asserting that "God is on our side!" as they gather up power, profit and young maidens to debauch or sell into slavery. Seems to be a pretty good recruiting tool when coupled with the chance to fight the "Great Satan" and its minions.

In the long run, our side offers . . . what exactly again?

An end to the strife between the Muslim sects? Given that war has been going for 1300+ years, that seems somewhat unrealistic.

No, we need to kill the ISIS guys on the ground n Syria, Iraq, or wherever and then whack the ones who try to bring the fight to us at home.

Whether that home is the U.S., France, Belgium, Canada, Australia, Germany, Britain or . . .