A Quick But Excellent Read on Naval Strategy

Yesterday's strategy post provided the latest "A Cooperative Strategy for 21st Century Seapower" and links to other key works on the topic. In the volume discussed below, this is described as:


. . .[T]he so-called maritime strategy, which is periodically devised or revised by the chief of naval operations and his contemporaries in the Marine Corps and Coast Guard, serves not only as a guiding document for professionals but a form of "advertisement" for the sea services as well. 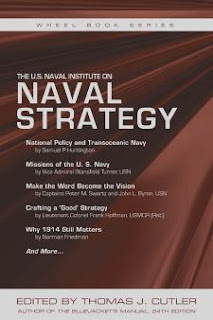 From USNI "Wheel Book Series," The U.S. Naval Institute on Naval Strategy, Thomas J. Cutler, Editor, a selection of articles first appearing in the pages of the Institute's Proceedings


Strategy is described by the Dictionary of Modern Strategy and Tactics as having “a permanent nature, but an everchanging character.” For more than a century, both the nature and the character of this essential discipline have been explored in depth by contributors to the Naval Institute’s magazines, books, and oral histories. Drawing from those powerful resources, this collection makes clear why naval strategy has always straddled the boundaries between art and science and why its study and employment are essential components of the sea service profession.

All so available as an ebook.