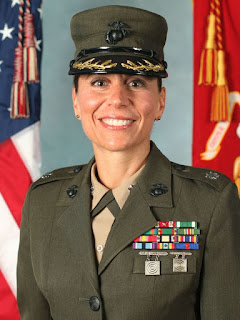 Please join us at 5pm (EST) on 24 Jan 16 for Midrats Episode 316: "Getting Female Combat Integration Right With LtCol Kate Germano"


How do we get combat integration of women right? The quest has moved well away from "if" and in to "how."

With an apparent broad disconnect between biological realities, cultural norms, and political desires, what is the right way for military leaders to carry out their orders while ensuring that combat effectiveness is maintained.

Our guest to discuss this and related issues for the full hour will be Lieutenant Colonel Kate Germano, USMC.

Commissioned in August 1996, LtCol Germano has served for over 19 years on active duty in the United States Marine Corps. A combat veteran, she additionally participated in numerous operational and humanitarian assistance and disaster relief deployments. Ashore, her duties including a year as the Marine Aide to the Secretary of the Navy.

She was selected for command twice, most recently as the commanding officer of the Marine Corps’ only all-female unit, the 4th Recruit Training Battalion. She holds a bachelor’s degree from Goucher College, where she majored in History with a pre-law emphasis. In 2011, she graduated with distinction from the Marine Corps Command and Staff College, earning her Masters of Military Science degree. She is actively engaged in the struggle to end gender bias in the military, and is a vocal proponent for equal rights and the elimination of double standards and lowered expectations for female conduct and performance.