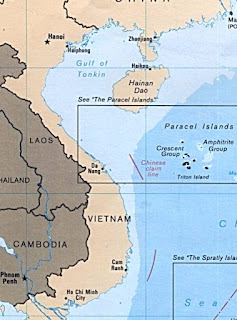 Most of the Office of Naval Intelligence World Wide Threat to Shipping report for 21 Jan 2016 is a rundown of the sordid side of criminal acts against merchant shipping and yachts. However, there is one incident from 16 14 Jan that deserves special attention because it highlights the on-going aggression by Chinese vessels against the fishing fleets of other nations in the South China Sea area:


2. (U) VIETNAM: On 14 January, Vietnam-flagged fishing boat QNg 98137 carrying 10 fishermen from Quang Ngai was operating in an area 90 nautical miles off the central city of Da Nang when it was attacked by a vessel with a steel hull, white cabin and Chinese letters on its side. After the first direct hit on the fishing boat's cabin, the fishermen rushed to retrieve all of the fishing nets to prevent them from being damaged or washed away. The Chinese vessel then crashed into the boat for a second time, this time at its starboard side, a spokesman said. The
attack caused severe damage to communication cables, the navigation cabin and several other parts of the ship,
(www.tuoitrenews.vn)


The map above shows Da Nang and has a line added to show the fictious Chinese assertion of "ownership" of a chunk of the South China Sea under their "nine dashed line" theory, also known as China's "land and sea grab."
Posted by Mark Tempest at 1/26/2016 11:36:00 AM