The Groucho Marx State of the Union: "Are you going to believe me, or what you see with your own eyes?" 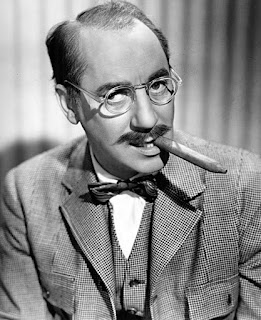 What happens when the President of the United States and the people of the country don't share the same vision of the path forward?

Finger pointing and blame, I gather.

As I read about the State of the Union speech, I can see that this President still doesn't think we, the majority of the American people, his ultimate bosses, "get it."

We've seen this before when he has blamed our reluctance to follow his path to his perceived socialist-lite heaven on a failure to properly communicate his message - his vision of where the U.S. ought to be.


But ultimately he blamed the American people for whatever concerns and fears they’re feeling. A president can only do so much, he said, without the people pulling their weight. Looking into the camera to the folks at home, he said, “It depends on you.” The grand vision he outlined “will only happen when the American people demand it.” By way of bringing the point home, he added that our form of government “is hard; it’s a lot easier to be cynical.”

What happens when the people don't support the President's vision? They elect members of the opposition to office in Congress in hopes of controlling the direction of country. As they did in the last election.

If you are frustrated, you might well ponder that. Sure, it might be a failure of messaging, but it seems to me to be more likely that they are rejecting your desired path, over and over again. In short, the majority of the American people do not "demand" your vision but rather reject it. Reality keeps the majority grounded - they can see what is happening and they are not happy.

It doesn't help that the efforts to spin the achievements of your administration is so obvious that we are left with that Groucho Marx quote in the header to this post - a President asking "Are you going to believe me, or what you see with your own eyes?"
Posted by Mark Tempest at 1/13/2016 12:22:00 PM