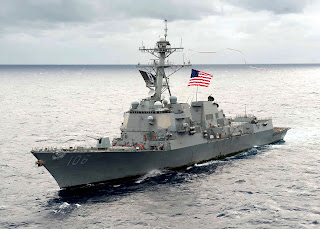 
The Great Green Fleet is a Department of the Navy initiative highlighting how the Navy and Marine Corps are using energy efficiency and alternative energy to increase combat capability and operational flexibility. At the close of the ceremony, the Arleigh Burke-class guided missile destroyer USS Stockdale (DDG 106) left the pier to begin its deployment, becoming the first U.S. Navy ship running on an alternative fuel blend as part of its regular operations.

"When it comes to power, my focus has been about one thing and one thing only: better warfighting," said Mabus. "The Great Green Fleet shows how we are transforming our energy use to make us better warfighters, to go farther, stay longer and deliver more firepower. In short, to enable us to provide the global presence that is our mission."

The blend fueling the JCS CSG's surface ships contains alternative fuel made from waste beef fat provided by farmers in the Midwest. It was purchased at a cost-competitive price through a partnership between the Department of the Navy and U.S. Department of Agriculture (USDA) aimed at making alternative fuel blends a regular part of the military's bulk operational fuel supply.

With the USS John C. Stennis (CVN 74) and Stockdale in the background, Mabus and Vilsack explained why this milestone alternative fuel purchase is important to the Navy and Marine Corps, and how it supports America's farmers, ranchers and rural manufacturing jobs.

Mabus said, "Diversifying our energy sources arms us with operational flexibility and strengthens our ability to provide presence, turning the tables on those who would use energy as a weapon against us."

"The Navy's use of renewable energy in the Great Green Fleet represents its ability to diversify its energy sources, and also our nation's ability to take what would be a waste product and create homegrown, clean, advanced biofuels to support a variety of transportation needs," said Vilsack. "Today's deployment proves that America is on its way to a secure, clean energy future, where both defense and commercial transportation can be fueled by our own hardworking farmers and ranchers, reduce landfill waste and bring manufacturing jobs back to rural America."

So, vote buying, then.

The most energy efficient, non-CO2 emitting ship mentioned in the article is Stennis which is nuclear powered.

Given that Stockdale is gas turbine powered, the number of alternative fuels is not very limited. As noted here (pdf):

You should also note that the price of crude oil is today below $30 barrel and the U.S. has a plentiful domestic supply as well as a enormous supply of natural gas.

Of course, those supplies are mostly in "red states" like Texas and so the jobs provided by the oil and gas industry don't appear to count as much as jobs "in rural America" wherever that is, though Texas and other oil producing states seem to have a lot of "rural" in them to me.

I'm really interested in the logistics train  that will have to follow Stockdale if the intent is to keep the ship running on this blend for an entire deployment. Will she have her own tanker carrying this "special fuel" or what? What does that add to the operating costs of the fleet and who is paying for it (other than the taxpayers)?

I might be wrong, though, so you can read all about the Great Green Fleet here.


The U.S. Navy will formally deploy its so-called "Great Green Fleet" on Wednesday, sending warships to sea on biofuels even though oil prices have dropped 70 percent since congressional Republicans first criticized the high cost of alternative fuels.

Navy Secretary Ray Mabus told Reuters the deployment is the next step in a fleet-wide effort that has seen the Navy cut its oil consumption by 15 percent since he took charge in 2009 and the Marine Corps curb its use by 60 percent.

A focus on energy and energy-saving technology gives the U.S. Navy a military advantage, Mabus said. An amphibious assault ship like the USS Makin Island, which uses a dual electric-diesel propulsion system, can stay on station three times longer than a conventionally powered vessel, he said.

“It gives us an edge tactically, it gives us an edge strategically,” Mabus said. “It keeps … fuel from being used as a weapon against us.”
***
Mark Cancian, an analyst at the Center for Strategic and International Studies and former White House budget official, said the initiative is as much about environmental symbolism as cost savings or tactical advantage.

Many congressional Republicans objected three years ago when the Navy sought and won support for defense subsidies to help three private firms build biofuel refineries. With oil now selling around $30 a barrel, that skepticism remains.

"They have not changed their position, which is that these are too expensive and not needed," Cancian said.

The Defense Department uses about 14 million gallons of fuel a day, with the Navy responsible for about a quarter of that, according to figures from the Defense Logistics Agency.

When the Navy first tested biofuel versions of marine diesel and jet fuel in 2012, it spent eye-popping sums for small amounts.

The fuel being used for the Great Green Fleet deployment is a competitively priced blend of 90 percent diesel and 10 percent biofuel based on a beef tallow feedstock, Navy officials said.

The Navy pays $2.05 per gallon, thanks in part to a subsidy of 15 cents per gallon from the Commodity Credit Corp., a government-owned enterprise that supports farm products.

With fracking and all the new recovery techniques, it seems the issue of bad guys using "fuel as a weapon" is a ship that has sailed.

But "environmental symbolism?" That's a nice turn of phrase.

Email ThisBlogThis!Share to TwitterShare to FacebookShare to Pinterest
Labels: Biofuels, Fueling the Military, Not So Much Humor, Oil and Politics