Apparently the secretariat of the U.S. Navy has solved all the other problems facing the Navy and decided to rearrange the deck chairs on the Titanic or, as Sam LaGrone reports, "Navy Eliminating 241-Year-Old Rating System in New Enlisted Rank Overhaul":


After more than 200 years, the Navy is making a fundamental change in how it will address its enlisted sailors, according to a notification on the new policy obtained by USNI News.

Starting today, the service will shelve the rating system it adopted from the U.K. Royal Navy, stop referring to sailors by their job titles and adopt a job classification in line with the Army, Marine Corps and the Air Force.

The change comes as Secretary of the Navy Ray Mabus has pushed the Department of the Navy to create gender-neutral titles for positions like rifleman and motorman. 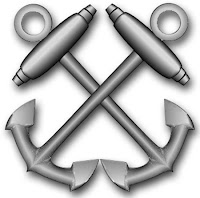 A service official familiar with the process told USNI News Mabus’ gender-neutral push – examining ratings like Yeoman, Legalman and Damage Controlman – was the genesis of the look by the Navy’s personnel establishment.

Some people leave meaningful change in their wake and other just leave a trail of dumb.

If I had earned my way to be "Sonar Technician Second Class," I think I would prefer not to be confused with - oh, I don't know - a deck ape (and don't get me wrong, I personally enjoyed my time amongst the deck apes) or goodness knows,  a Legalman.
Posted by Mark Tempest at 9/29/2016 02:49:00 PM

Email ThisBlogThis!Share to TwitterShare to FacebookShare to Pinterest
Labels: Fun with Big Government, Fun with the Navy