South of the South China Sea Fun: Indonesia and U.S. to Work Together Off Indonesian Waters 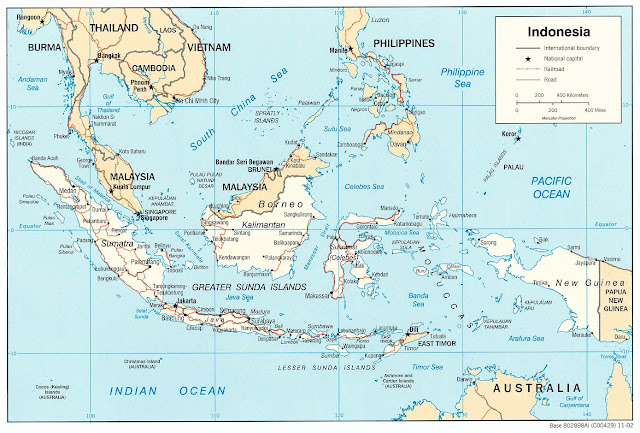 
Indonesia and the United States have planned to carry out joint patrols around the outer maritime boundaries of Indonesian territorial waters in an effort to combat illegal fishing and human trafficking, Indonesia's Ministry of Marine Affairs and Fisheries said Wednesday.

Indonesia has been cracking down on illegal fishing recently as set out by Nick Wadhams and Bill Faries of Bloomberg in"Blowing Up Boats Sets Indonesia’s Scarce Fish Swimming Again":


Since the end of that year, Indonesia has destroyed 220 foreign boats. It has also faced increased Chinese claims that waters surrounding the gas-rich Natuna Islands are part of traditional Chinese fishing grounds.
“We catch them and we sink them,” Pudjiastuti said of the boats. “That’s the new rule, the national consensus.”
“If you fish in my EEZ, that’s illegal fishing,” she said, referring to Indonesia’s 200-nautical-mile exclusive economic zone. “If that fish is in my EEZ, that’s mine. If that fish swims past the EEZ, that’s anybody’s.”

See my previous posts on Indonesia and its push back against China's aggressive claim to SCS ownership China's Fishing Fleet: Apparently Only Chinese Waters Are Sovereign and Malaysia Complains About Chinese Fishing Fleet "Intruding" Into Its Waters, Indonesia Continues Protest of Chinese Incursions.

Why the fuss? Nice discussion of part of the issues in the SCS region at Fishing, not oil, is at the heart of the South China Sea dispute:


For a relatively small (around 3 million square kilometres) patch of the oceans, the South China Sea delivers an astonishing abundance of fish. The area is home to at least 3,365 known species of marine fishes, and in 2012, an estimated 12% of the world’s total fishing catch, worth US$21.8 billion, came from this region.

These living resources are worth more than money; they are fundamental to the food security of coastal populations numbering in the hundreds of millions.

Indeed, a recent study showed that the countries fringing the South China Sea are among the most reliant in the world on fish as source of nutrients. This makes their populations especially susceptible to malnutrition as fish catches decline.

These fisheries also employ at least 3.7 million people (almost certainly an underestimate given the level of unreported and illegal fishing in the region).
***
The South China Sea’s fisheries are seriously over-exploited.

Last year, two of us contributed to a report finding that 55% of global marine fishing vessels operate in the South China Sea. We also found that fish stocks have declined 70% to 95% since the 1950s.

Over the past 30 years, the number of fish caught each hour has declined by a third, meaning fishers are putting in more effort for less fish.

This has been accelerated by destructive fishing practices such as the use of dynamite and cyanide on reefs, coupled with artificial island-building. The coral reefs of the South China Sea have been declining at a rate of 16% per decade.

Over-fished and vital to the local populations surrounding the SCS.

Indonesia has also entered into a joint patrol agreement with the Philippines:


The Coordinating Minister for Political, Legal and Security Affairs Wiranto said Indonesia and the Philippines have reached an agreement to conduct joint patrol on the Sulu waters in the Philippines.

“Joint maritime patrols will be carried out to monitor Sulu waters, which is prone to piracy,” Wiranto said yesterday, September 14, 2016, at Senayan Parliamentary Complex Jakarta.

According to Wiranto, the respective countries’ armed forces will be allowed to handle pirates in the Sulu waters. The agreement will enable Indonesian personnel to pursue and subdue pirates even if they crossed the Philippine borders. Previously, Indonesia had encountered difficulty for its inablility to cross the Philippine waters in hot pursuit of pirates. “It’s a key issue,” he said.