Saturday Is Old Radio Day: Constitution Day - You Are There and "The Ratification of the U.S. Constitution" 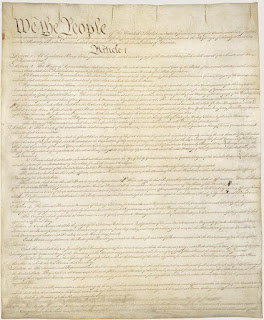 September 17 is "Constitution Day" because:


Constitution Day commemorates the formation and signing of the U.S. Constitution by thirty-nine brave men on September 17, 1787, recognizing all who, are born in the U.S.
or by naturalization, have become citizens.


From this document and its amendments spring comes the structure of our government and a recognition of certain rights that the government is forbidden to interfere with.

Of course, the formation and signing of the Constitution was followed by the need to get the states to ratify it - as set out here:


It took 10 months for the first nine states to approve the Constitution. The first state to ratify was Delaware, on December 7, 1787, by a unanimous vote, 30 - 0. The featured document is an endorsed ratification of the federal Constitution by the Delaware convention. The names of the state deputies are listed, probably in the hand of a clerk. The signature of the President of Delaware's convention, Thomas Collins, attests to the validity of the document, which also carries the state seal in its left margin. Delaware's speediness thwarted Pennsylvania's attempt to be first to ratify in the hope of securing the seat of the National Government in Pennsylvania.

The first real test for ratification occurred in Massachusetts, where the fully recorded debates reveal that the recommendation for a bill of rights proved to be a remedy for the 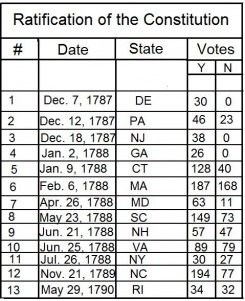 
In honor of the day the world was presented with the U.S. Constitution, here's a dramatization of "The Ratification of the Constitution" from the show "You Are There" -