Last time I went on a zombie fighting binge, I opted, true to my surface navy roots, for going boating. See Planning for that Zombie Attack: Littoral and "Brown Water" Defenses:


I believe that this land-based approach is not as sound as a littoral or brown water zombie defense approach, which maximizes mobility, security and comfort.

Now, in the classic land-based zombie defense posture, as repeated by Chuck, you seek a remote house and board yourself into it, while awaiting the inevitable zombie horde pounding on the windows and doors while you expend your ammo, food and foul water.
***
How much better to head for the local lake, river or ocean marina and "adopt" a boat on which you load, food, water, ammo, weapons and . . . fishing gear. While the zombies gather on the shore groaning at you, you proceed to open water and drop anchor (Note: water should be at least 20 feet deep - so zombies can't "piggy back" their way on board). While you wait out the zombies, you fish, drink beer and have the comforts of home. Practice "repelling boarders." Should the zombies show or develop nautical skills, weigh anchor and move to another, less infested area.

Well, after reading more books which, by the way, seem mostly devoted to the proper selection of guns and ammo and less devoted to selecting good defensive positions (see, e.g. "Home series" by A. American), I am struck by how well some of the heroes set things up for survival with food, water, ammo, etc, and then try to defend a house or neighborhood which has no natural barriers to help the hero help himself by limiting the areas needed to be defended.

Let me put it this way - the Alamo was a terrible place to mount a defense because it could be surrounded. Being surrounded meant that even with interior lines, the limited number of defenders had a lot of area to protect and had no way out to get more food, water, ammo, people, etc. Their only hope was that outside forces would arrive in time to save them from their poor site selection.

So it seems in most zombie defense books. In the Mr. Molles books, his people develop a compound based around an old vehicle maintenance facility in a small town in central North Carolina (apparently HB2 is not an issue with zombies or "the infected") with roads leading into it and woods around at least part of it. It's a fort, and the bad things out there can get to it from all sides and can, if they so choose, cut off access to and from pretty easily. Those in the fort have issues with . . . clean water, food and etc. 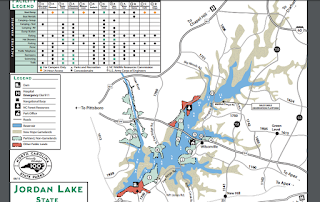 First off, I want a location on the water - fresh water so I have it at hand and won't die of thirst. In central NC we have couple of lakes that the U.S. Army Corps of Engineers set up. One of them is Jordan Lake located south of Durham and Chapel Hill and Southwest of Raleigh. It's a nice big freshwater lake containing fish and surrounded by woods that have deer and other game in them. And, no, the lake was not named after Michael Jordan. 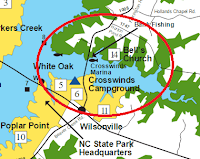 Now, I want to be surrounded by deep water as much as I can be and any land link that exists, I want to be narrow and defensible. To me that suggests a peninsula. A peninsula gives me access to water for both drinking and as an escape route should it be necessary.

A shore base gives me access to wood, wildlife and road systems.

In my planning, I am going to look for a marina at which I can "liberate" boats for survivors who are with me. Power boats are nice, but there is that fuel issue, so in addition to power boats, I want canoes and sail boats. There is a marina on the Jordan Lake that has such things. It's in the circled area in the image to the right. I might buy a small sail boat and keep it there stocked with necessities.

That marina does not look as defensible to me as other areas. For example, here's a nice peninsula: 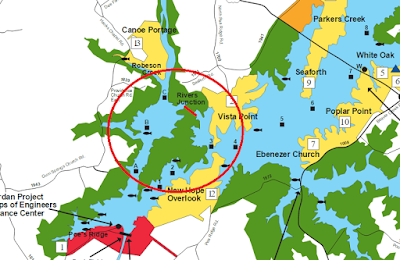 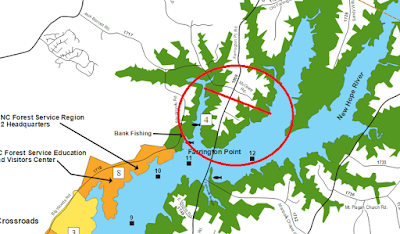 The red lines across the peninsulas suggests areas where I would construct defenses - abatis, razor wire and such.


Unlike the troops at Bataan, the plan is not to wait for rescue by outside forces. The plan is to make the peninsulas chosen for defense to be both as secure as possible, defending lake access for water, food and resupply from caches (preferably also located on such peninsulas).

If a location is threatened with being overrun, then the solution is to retreat to open water until the zombies die from lack of brain food or whatever.

Now, does this thinking change if the event is not zombies but something like an EMP thingie? Nope, the logic is the same - water, food and safe shelter. Might have to worry about lake pirates, though.

Thus endeth the deep thinking of this day.