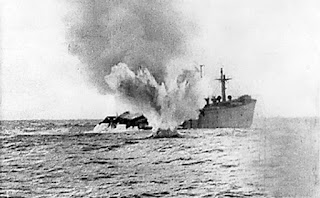 Early in WWII, Hitler's plan was to cut off supplies to the British Isles and starve the Brits into submission. Using his submarine force the effort was to stop the flow of oil, war material and food from Canada, the U.S and the western hemisphere.

As set out here, the losses to merchant shipping were terrific: 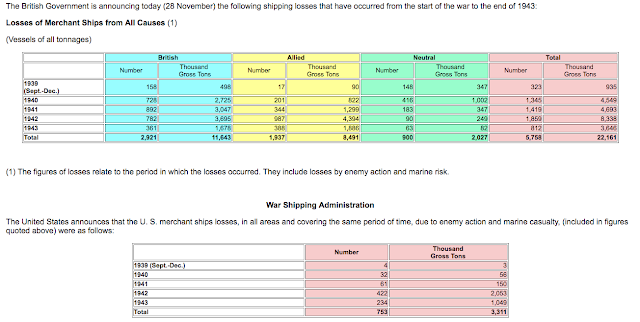 The fight against the U-boats was the "Battle of the Atlantic":


Winston Churchill once wrote that, '... the only thing that ever really frightened me during the war was the U-boat peril'. In saying this, he correctly identified the importance of the threat posed during World War Two by German submarines (the 'Unterseeboot') to the Atlantic lifeline. This lifeline was Britain's 'centre of gravity' - the loss of which would probably have led to wholesale defeat in the war. 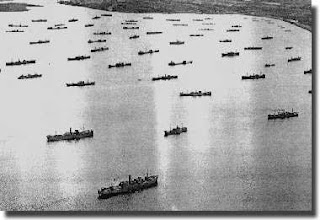 Not that convoys were a new technique - instead their use in WWII was a modern adoption of a practice used almost since the dawn of shipping - placing armed escorts with merchant ships to prevent the cargo vessels from being taken by pirates and other bad actors.

It is useful to take a look at the U.S. Naval History and Heritage Command's republication of History of Convoy and Routing [1945] (also available here):


D. DEVELOPMENT OF U.S. SHIPPING CONTROL PRIOR TO OUR ENTRY IN THE WAR

1. Since the beginning of their war in 1939 the British Admiralty, through their Naval Control Service Officers (N.C.S.O.) in the principal ports of the world, have maintained a routing, diverting and reporting service, covering all areas except those under control of the Axis. The details of instruction for N.C.S.O.'s are laid down in "Naval Control Service Instructions". The reporting system so established was called "VESCA" system, and that portion of it devoted to U.S. merchantmen was known as the "CHATFOLD" system, centered in Ottawa. Individual routes for all independently sailed ships under British and Allied registry were furnished from main ports under such standard routing orders as those contained in "Mercantile Atlantic Routing Instructions" (short title MARI)54 64 (see Chapter V).

2. Article 714 of Navy Regulations specifies that in time of war "the Commander in Chief shall afford protection and convoy, so far as it is within his power, to merchant vessels of the United States and to those of Allies." As the Axis threat developed it gradually became apparent to the Chief of Naval Operations in Washington that the U. S. Navy would require an organization similar to the Admiralty's particularly in the event of the war being forced on us. A Ship Movements Division (Op-38) had been set up during World War I, and had continued in existence. Furthermore, in June 1939 a new Naval Transportation Service, War Plan Orange (WPNTS-1) had been issued, based on the tasks assigned by the Basic War Plan, as a consequence of which the Port Directors (San Francisco and New York particularly) had built up their organization. The Joint Merchant Vessel Board, also organized in World War I, but virtually inactive since, was revitalized bytransfer to Op-30-M in September 1939. On 13 November 1939 the C.N.O. (Op-30M-BD, Serial 7904) sent a letter to Commandants of all Naval Districts, less 9th and 16th, concerning duties of Port Directors in war; "Port Director - Guide for Peace Time Preparation for War". About August 1940 the first compilation was made of merchant vessels and small craft suitable for Navy use. Shortly thereafter, on 14 November, Op-30-M was transferred to Op-38 and set up as Op-38-S, Ship Movements Division31.
3. Material progress appeared in the "Report of the Combined British-United States Staff Conversations" (short title ABC-1)dated 27 March 1941. By Annex V of this report the world was divided into two spheres of merchant ship control in place of the previous world-wide British system. U. S. control was to extend over the western half of the Atlantic from about 26° W and the whole Pacific to 100° E. The British service was to continue to function in the U. S. area until such time as we were ready to assume full responsibility. The Sea Frontier had not yet been established and the idea of a fleet control zone outside the limits of the coastal zones was still a basic feature50.

4. After the conclusion of this ABC-1 agreement there was prepared in the office of the Chief of Naval Operations (Division of Ship Movements, Captain Charles S. Alden, U.S.N.) the "Principal Navy Shipping Control Plan, Rainbow No. 5" (short title WPSC-46). This basic plan - which superseded pamphlet "Navy Shipping Control-General Instructions", prepared by Op-38-S on June 19 1941 - outlined the tasks of the Chief of Naval Operations, Commanders in Chief and what were then known as Coastal Frontier Commanders in connection with the control of merchant shipping; agreements with great Britain, New Zealand and Australia; and general instructions for the operation of the Merchant Ship Control Service. (Note: This plan, which is based upon Navy Basic War Plan - Rainbow No.5, was actually promulgated 15 December 1941 by C.N.O. letter, Op-38-S-P, serial 064038. It was to remain the basic ship control directive until superseded 28 February 1944 by MER-1, issued with Cominch serial 00678, mentioned in the opening paragraphs of this history)5 31 59.

5. On 17 October 1941 the first actual routing directive for merchantmen of American Flag was issued by Op-38-S-A, under the subject of "Routing of American Flag Merchant Shipping", and addressed to Commanders, Coastal Frontiers and Naval Districts and Commanders in Chief, Atlantic, Pacific and Asiatic Fleets. Although the routing of merchant ships continued to be of the utmost importance, considerable opposition was experienced from merchant ship operators, Maritime Commission, etc., and long conferences wasted valuable time4 31.

6. Finally, on 18 November 1941, to administer the directives of WPSC-46, a "Convoy and Routing Section" (Op-38-O) under the Ship Movements Division in the Office of the Chief of Naval Operations, (then Admiral H. R. Stark) was organized and placed in effect with the immediate objective of assuming responsibility in the Western Atlantic area west of the dividing line of responsibility. Thus it can be said that "Convoy and Routing", gradually developed as "Ship Movements Division" since the summer of 1940, was finally brought into operation only 19 days before the attack on Pearl Harbor59.

Yes, it's not the most exciting reading, but, as you read the source material, think about the consequences to the war effort had there not been such an organization put into place . . .
Posted by Mark Tempest at 11/30/2016 07:30:00 AM