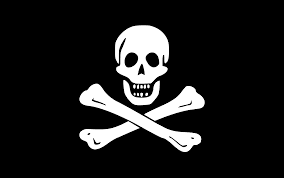 As the ICC's International Maritime Bureau puts it "Threat to seafarers remains despite piracy clampdown" and support their statement with numbers:


IMB's latest global piracy report shows that pirates armed with guns or knives took 110 seafarers hostage in the first nine months of 2016, and kidnapped 49 crew for ransom. Nigeria, a growing hotspot for violent piracy and armed robbery, accounts for 26% of all captures, followed by Indonesia, Malaysia, Guinea and Ivory Coast.
But with just 42 attacks worldwide this quarter, maritime piracy is at its lowest since 1996. IMB's Piracy Reporting Centre (IMB PRC) has recorded 141 incidents so far this year, a 25% drop from the same period in 2015. A total of 111 vessels were boarded, five were hijacked, 10 were fired at, and a further 15 attacks were thwarted.
"We are encouraged by the efforts of national and international authorities - and the shipping industry - to keep piracy down. But clearly the threat to crew being taken hostage remains, and it is therefore necessary for shipmasters and response agencies to remain vigilant," said Pottengal Mukundan, Director of IMB, which has monitored world piracy since 1991. 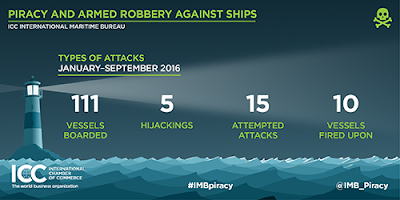 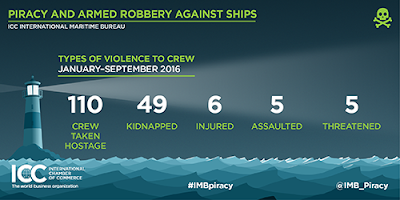 It's a dangerous world and some places and jobs are more dangerous than others.