Our Sealift Program provides high-quality, efficient and cost-effective ocean transportation for the Department of Defense and other federal agencies during peacetime and war. More than 90 percent of U.S. war fighters' equipment and supplies travels by sea. The program manages a mix of government-owned and long-term-chartered dry cargo ships and tankers, as well as additional short-term or voyage-chartered ships. By DOD policy, MSC must first look to the U.S - flagged market to meet its sealift requirements. Government-owned ships are used only when suitable U.S.-flagged commercial ships are unavailable.

One high-speed transport vessels recently acquired by our Navy also belong to MSC. USNS Guam (HST 1), formerly MV Huakai, will replace the high-speed vessel Westpac Express, whose mission is to transport military personnel and cargo for the 3rd Marine Expeditionary Force between Okinawa and other U.S. Pacific Command training sites. The specific mission of USNS Puerto Rico (HST 2) is still being evaluated.

During wartime or other contingencies, our Navy charters dry cargo ships under contract to MSC to move cargo as needed. These ships carry items that are too large to fit in containers, such as engineering and construction equipment, military vehicles, aircraft and ammunition.

With a shrinking U.S. merchant fleet, the importance of ready and available surge vessels increases each year. The Ready Reserve Force, owned and maintained by the Maritime Administration, provides a resource to offset the shortage of militarily useful U.S.-flagged ships. The RRF consists of fast sealift ships, roll-on/roll-off ships, lighter aboard ships, heavy lift ships, crane ships and government-owned tankers. Maintained in four-, five-, 10- or 20-day readiness status, these ships are activated when needed, fully crewed and placed under the operational control of MSC in support of U.S. wartime, humanitarian and disaster-relief operations. RRF ships are also used for some military exercises.


With these Sealift ships, the MSC graphic fills in: 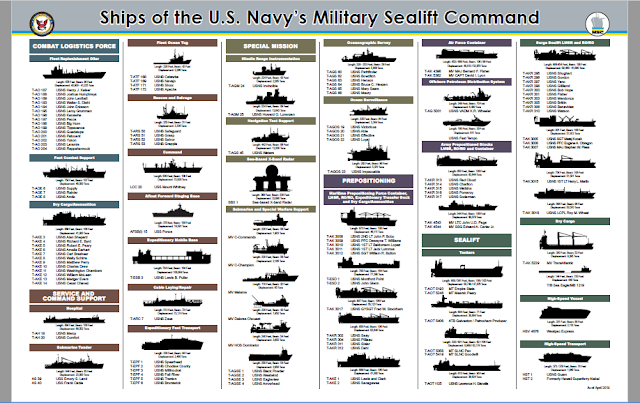 
The Ready Reserve Force (RRF) program was initiated in 1976 as a subset of the Maritime Administration’s (MARAD) National Defense Reserve Fleet (NDRF) to support the rapid worldwide deployment of U.S. military forces. As a key element of Department of Defense (DOD) strategic sealift, the RRF primarily supports transport of Army and Marine Corps unit equipment, combat support equipment, and initial resupply during the critical surge period before commercial ships can be marshaled. The RRF provides nearly one-half of the government-owned surge sealift capability. Management of the RRF program is defined by a Memorandum of Agreement (MOA) between DOD and Department of Transportation (DOT). 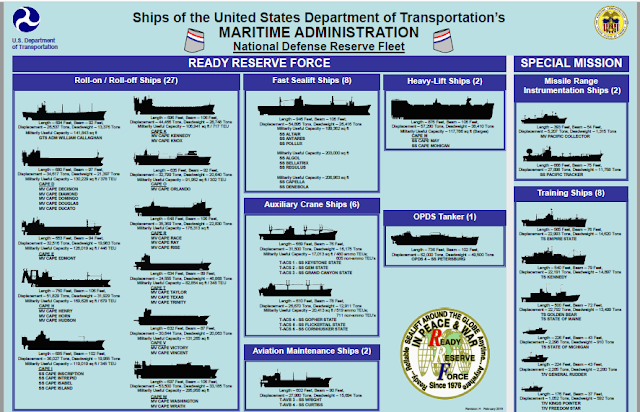 With the exception of any ships contracted on an "as needed" to carry U.S. military cargoes, the posts in this series have set out the sea-going logistics force.
Posted by Mark Tempest at 11/26/2016 09:30:00 AM