Demographics of the Mediterranean Migration

Well, if you thought the "migrants/refugees" were the wretched refuse of war-torn states and consisted mostly of pitiful family groups, the UNHCR has some statistics for you: 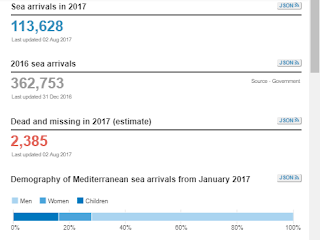 Looking at these charts, Bangladesh, Ivory Coast (Cote d'Ivoire), Guinea and Nigeria lead the pack in numbers, totalling a little over 40189 from Jan 2017. That's 42% of the total on on the chart.

If you include Eritrea as another war affected state, the two "war states" together count for under 10% of the totals reported.

Here's another chart this one from IOM- UN's Internation Organization for Migration: 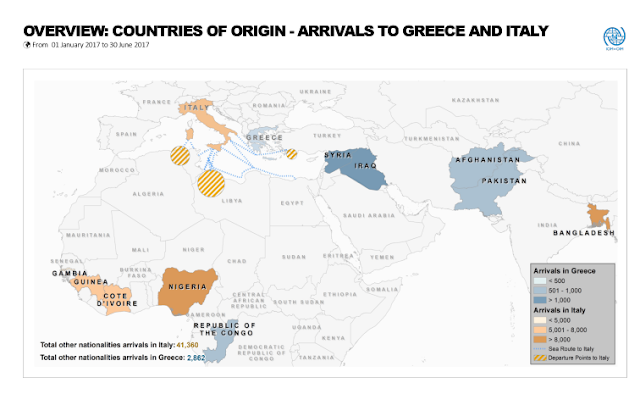 Confused? As the UNHCR recognizes, there is a vast difference between "migrants" and "refugees":


Refugees are persons fleeing armed conflict or persecution. There were 21.3 million of them worldwide at the end of 2015. Their situation is often so perilous and intolerable that they cross national borders to seek safety in nearby countries, and thus become internationally recognized as "refugees" with access to assistance from States, UNHCR, and other organizations. They are so recognized precisely because it is too dangerous for them to return home, and they need sanctuary elsewhere. These are people for whom denial of asylum has potentially deadly consequences.
Refugees are defined and protected in international law. The 1951 Refugee Convention and its 1967 Protocol as well as other legal texts, such as the 1969 OAU Refugee Convention, remain the cornerstone of modern refugee protection. The legal principles they enshrine have permeated into countless other international, regional, and national laws and practices. The 1951 Convention defines who is a refugee and outlines the basic rights which States should afford to refugees. One of the most fundamental principles laid down in international law is that refugees should not be expelled or returned to situations where their life and freedom would be under threat.
The protection of refugees has many aspects. These include safety from being returned to the dangers they have fled; access to asylum procedures that are fair and efficient; and measures to ensure that their basic human rights are respected to allow them to live in dignity and safety while helping them to find a longer-term solution. States bear the primary responsibility for this protection. UNHCR therefore works closely with governments, advising and supporting them as needed to implement their responsibilities.
Migrants choose to move not because of a direct threat of persecution or death, but mainly to improve their lives by finding work, or in some cases for education, family reunion, or other reasons. Unlike refugees who cannot safely return home, migrants face no such impediment to return. If they choose to return home, they will continue to receive the protection of their government.
For individual governments, this distinction is important. Countries deal with migrants under their own immigration laws and processes. Countries deal with refugees through norms of refugee protection and asylum that are defined in both national legislation and international law. Countries have specific responsibilities towards anyone seeking asylum on their territories or at their borders. UNHCR helps countries deal with their asylum and refugee protection responsibilities. Politics has a way of intervening in such debates. Conflating refugees and migrants can have serious consequences for the lives and safety of refugees. Blurring the two terms takes attention away from the specific legal protections refugees require. It can undermine public support for refugees and the institution of asylum at a time when more refugees need such protection than ever before. We need to treat all human beings with respect and dignity. We need to ensure that the human rights of migrants are respected. At the same time, we also need to provide an appropriate legal response for refugees, because of their particular predicament.
So, back to Europe and the large numbers of people arriving in recent years by boats in Greece, Italy and elsewhere. Which are they? Refugees or migrants?
In fact, they happen to be both. The majority of people arriving in Italy and Greece especially have been from countries mired in war or which otherwise are considered to be ‘refugee-producing’ and for whom international protection is needed. However, a smaller proportion is from elsewhere, and for many of these individuals, the term ‘migrant’ would be correct.
So, at UNHCR we say ‘refugees and migrants’ when referring to movements of people by sea or in other circumstances where we think both groups may be present – boat movements in Southeast Asia are another example. We say ‘refugees’ when we mean people fleeing war or persecution across an international border. And we say ‘migrants’ when we mean people moving for reasons not included in the legal definition of a refugee. We hope that others will give thought to doing the same. Choices about words do matter.

Update: Good info from the BBC:


More than a million migrants and refugees crossed into Europe in 2015, sparking a crisis as countries struggled to cope with the influx, and creating division in the EU over how best to deal with resettling people.
The vast majority arrived by sea but some migrants have made their way over land, principally via Turkey and Albania. 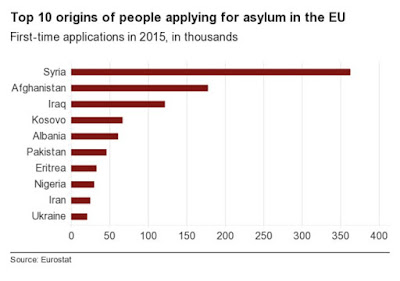 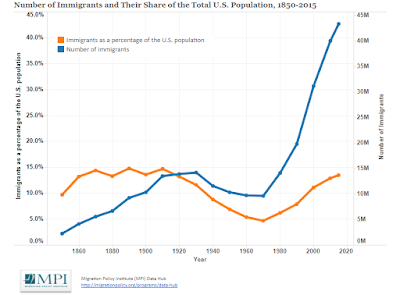 Source info:
The term "immigrants" (also known as the foreign born) refers to people residing in the United States who were not U.S. citizens at birth. This population includes naturalized citizens, lawful permanent residents (LPRs), certain legal nonimmigrants (e.g., persons on student or work visas), those admitted under refugee or asylee status, and persons illegally residing in the United States.