The Margin for Error at Sea is Very Thin 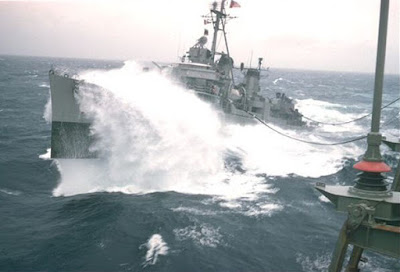 While we wait for the results of the inevitable investigation of the USS John S. McCain incident, it is good to remind those who will idly speculate about causation that there are almost "no easy days" at sea.

Unless you are engaged in a solo transit across the Pacific and haven't seen a ship in days, the possibility of a collision at sea exists. Add to that the "normal dangers" of operating equipment, of fire, of heavy weather, of finding mostly submerged objects (as in, say, a floting coconut tree trunk) that can ding your hull or ... or ...

As the David Harris poem goes:

The call of the seagulls,
near the edge of the sea,
is the lure that attracts men
to their boats to test the sea.
Waves dance a beckoning call, their waters to explore.
Therefore, men set off in their boats
to answer the wandering call.

However, to many a man
the sea maybe a mistress,
to others it is their downfall.
The sea can be a harsh mistress,
to some who come to call,
as they make time there forever,
deep in that watery bed

The storms she creates,
when angry,
has sealed many good men,
to an eternal fate.
So be warned my friends,
before you fall for the siren’s call.
The sea can be a harsh mistress.

As Bryan McGrath, CDR, USN (ret) answers in response to one of the interviewer's questions in the video below at about the 3:20 point:
Q: "Did you have any close calls?"
A: "Anyone who has been to sea for an extended period of time has had close calls . . ."

Which is why most Surface Warface Officers have a "there but for the grace of God . . ." reaction to an incident at sea.

We all know how thin the margin for error is at sea.

Many of us spent hours on watch thinking through "what if?" situations - "What if we lose steering while alongside another ship for an unrep?" "What if the ship approaching from my port side does something stupid?" "How big a turn do I need to make to make sure that merchant ship coming from my right knows for certain that I am manuevering to avoid him?" "How do I pick my way through all this ship traffic headed into Hong Kong . . . Tokyo . . . Singapore?"

My best CO's taught their junior officers to think that way.

They also went out of their way to give junior officers the chance to learn about the handling characteristics of the ship - man overboard drills, conning alongside for unreps, anchoring the ship, bringing the ship to the pier.

In addition, most of the good Commanding Officers I had were on at least their second command at sea, an experience level hard to achieve when, as CDR McGrath notes, the Navy today lacks enough ships to meet its missions.

All of which is to say, do not rush to judgement, but know that the U.S. Navy is, underneath it all, a learning organization and from recent disasters will become better.
Posted by Mark Tempest at 8/22/2017 03:39:00 PM

Email ThisBlogThis!Share to TwitterShare to FacebookShare to Pinterest
Labels: Seamanship