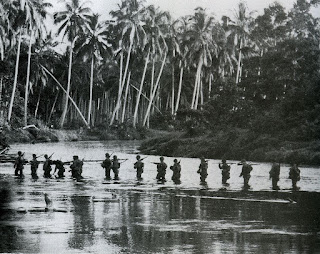 75 yeara ago, in August 1942, U.S. Marines landed on Guadalcanal in the Solomon Islands. Out of this assault, which involved Navy, Army and Marines came a hard fought victory which lasted into February 1943.


Perhaps the entire period between 7 August 1942, when the first Marines landed in the Solomons 1, and the final evacuation of Guadalcanal by the Japanese should be labeled "The Battle of Guadalcanal." Hardly a day went by during that 6 months which did not see action on land, in the air, or on the sea.


Out of this battle came Richard Tregaskis' Guadalcanal Diary which became a movie and then this radio version.

An excellent look at the naval aspects of the action at Guadalcanal is James Hornfischer's Neptune's Inferno: The U.S. Navy at Guadalcanal.

We interviewed Mr. Hornfischer on Midrats back in 2011: