Maritime Trade Routes Are Vital, But "90% of World's Goods" Are Not Transported By Sea


Maritime transport is essential to the world’s economy as over 90% of the world’s trade is carried by sea and it is, by far, the most cost-effective way to move en masse goods and raw materials around the world.

Attempting to track down the source of that 90% figure is elsusive, as is trying to determine what that 90% covers. Is it in terms of "value" or "tonnage" or "volume" or some other quantity?

Now, as you might gather if you've visited here before, I am as pro-seaborne commerce as anyone, but . . .

Let's look at some common sense facts beginning with trade among neighboring states that share a border. Factoid from World Ocean Review:


With respect to the value of the goods, about 23 per cent of world trade is between countries with a common border. This percentage has remained fairly constant over recent decades. Between continents, however, it differs a great deal depending on their level of development. In Europe and North America the proportion is the highest at 25 to 35 per cent. This trade is predominantly transacted by road and rail. Cargo between countries without a common border is carried mainly by sea, although increasing quantities of manufactured goods are being forwarded by air. Growth rates for air freight are more than double those for shipping in recent years. Which mode of transport handles how much cargo depends on the (relative) transportation costs and the value-to-weight ratio of the goods – the higher the value per unit of weight, the less significant the cost of transportation. Punctuality and reliability are considered more important for valuable commodities.

Makes sense. For example, trade betwee the U.S. and Canada or Mexico does involve a lot of road and rail transport and includes pipelines, too. The EU and other countries have a lot of cross border trade. On the other hand, 90% might be a good number for countries like Great Britain or Australia, because they are islands without directly bordering states.

That 23% "common border" trade  would seem to cut the amount of "world trade"carried by ships down to 77%, wouldn't it? Well, no. Even between countries with a common border, there may be ocean shipping of some products - like between the U.S. and Mexico. See below.

Internal pipelines, river, rail and trucking also account for move of goods internally in the U.S. Some of which may distribute imported goods, but I seriously doubt that this statement from the Atlantic is accurate:


Almost 90 percent of everything we buy arrives via ship, writes Rose George in her actually mind-blowing new book Ninety Percent of Everything, published tomorrow, which covers her months-long adventure with the shipping industry — the biggest business that you know nothing about.

In addition to the fact that some of what is bought in the U.S.  is produced internally in the U.S. or in our adjoining North American countries, there is this information The Bureau of Transportation Statistics:


Marine Transportation System transports the products that American businesses and
The residents use everyday. By value, vessels carry 53 and 38 percent of U.S. imports and exports, respectively (as shown in Figure 1)— the largest share of any mode.

Percentages based upon millions of U.S. dollars

The stuff that arrives by ship would have to be pretty vital if it is to account for "90% of what we buy."

A couple of more figures: 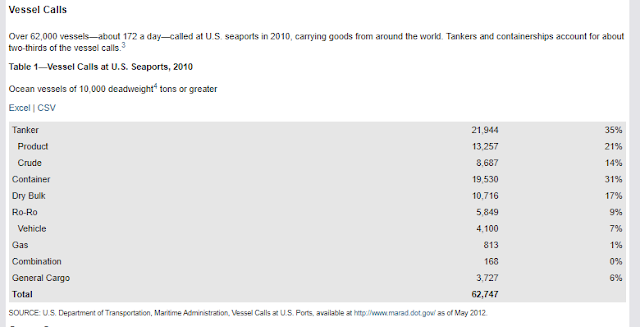 And one more showing NAFTA cross border trade increases from April 2016 to April 2017: 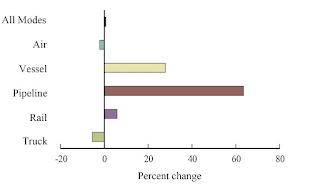 So,what's it mean? To paraphrase a famous deposition quote, "It depends on what your definition of "world's trade" is."

Now, it might mean "international trade" defined here as:


The two main data items used in the concept of international trade are imports and exports.

Imports of goods measures the value of goods that enter the domestic territory of a country irrespective of their final destination.

The first definition uses the word "value of goods."

Then there is this from the World Shipping Council:


The exchange of capital, goods and services across international borders is known as international trade and in many countries it represents a significant share of the nation's gross domestic product (GDP.) Liner ships transport approximately 60 percent of the value of seaborne trade or more than US $4 trillion worth of goods annually.

"Liner ships" are container ships, Roll-On/Roll-Off, car and truck carriers and break bulk ships. It does not include tankers. But tanker of all types are significant as noted here:


The single most significant type of cargo worldwide is crude oil, which alone accounts for roughly a quarter of all goods transported by sea.

In addition to crude oil you can assume that refined petroleum products and other liquids as well as natural gas in various forms (LNG, LPG) also account for a big chunk of shipping.

Add 60% for liner shipping and 25% for crude oil and you get 85% of the "value" of sea trade - or do you? What is the measure used in "a quarter of all goods transported by sea" when referring to crude oil? Volume? Value? Tonnage? Are we comparing apples to oranges?

So, after all that, what do we know?

Pretty sure that any one of the 90% figures referred to above is inaccurate - the number probably is somewhere around 70% at most.

Your calculations may vary, but in my view it is not necessary to hype the value of sea shipping but it is a good idea to keep a doubtful eye on those who repeat a high number without supporting data.