California's Power Problem, Paid for by the Rest of Us

So, there's some sort of "movement" afoot by some gaggle of Californians to secede from the rest of us not living in paradise. While this movement is largely political, it does raise some interesting questions about how the departed will deal some pressing issues, one of which is where it will get its power to run its cool high speed rail, not to mention businesses and homes and industries.

As noted in this Forbes piece from 2016,California's Growing Imported Electricity Problem


California now imports 33% of its electricity supply from fast growing neighbors, with about 65% of that coming from the Southwest and 35% coming from the Northwest. These numbers increase most in summer months when air conditioning loads peak. Imports have been rising rapidly: in 2010, California "only" imported 25% of its power.

Well, now. California has shifted (at the cost to its citizens in high energy prices) some of the cost of energy production (pollution, etc) to other states. Again from the Forbes piece:


And as seen with the 2015 drought, where low water levels had hydro dams producing 80% less power than normal, future generation and imports of hydropower will be restricted by climate change worsening drought. This is very bad news for California's already precarious power market: hydropower plays a "very important role in maintaining system reliability, because of the flexibility it provides system operators."

It's crucial to remember that drought and less hydropower available in the Northwest was a determining factor in California's "2000-2001 Power Crisis" that cost the state $50 billion in added energy costs, illustrating the problems of California's over-reliance on outside energy (California also unsustainably imports over 90% of its natural gas, the nation's fastest growing major fuel, and the source that other states will increasingly lean upon most to meet the Clean Power Plan).

At the time, neighboring governors rightly complained about California's unwillingness to build new generation capacity in the 1990s even though its demand was rising (proof here).

Further, EPA's new plan could force many of those coal plants that California imports from to shut down, leaving the state even more vulnerable to brownouts and blackouts (concerns continue to be raised nationally about policies that are lowering the reliability of our power grid: Eaton reports that blackouts already cost the U.S. about $150 billion a year).

Why the highlight on the "natural gas" section above? Take a look at this chart from here: 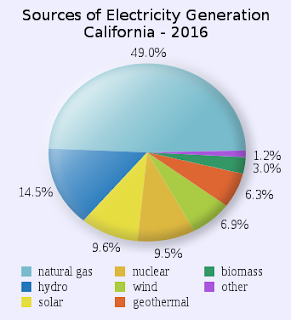 
California’s single remaining operational nuclear power plant, Diablo Canyon Power Plant, accounts for less than one-tenth of total generation. California used to have multiple other nuclear power plants, including the Rancho Seco Nuclear Generating Station, the San Onofre Nuclear Generating Station, the Vallecitos Nuclear Center,[15] and the Humboldt Bay Nuclear Power Plant,[16] in addition to various other smaller experimental or prototype reactors which intermittently supplied power to the grid, such as the Sodium Reactor Experiment. However all of these reactors have been shut down due to both economic[17] and social[18] factors. Currently, the owner of the Diablo Canyon plant, Pacific Gas & Electric, has plans to shut down the two reactors at the site in 2025.[19] This lost generation will be made up with renewables.

Well, renewables better work hard. The Forbes piece notes that at least one major solar project is not exactly 100% pure:


This dominance of natural gas in California is "bordering on the absurd." Just look at California's troubled Ivanpah solar thermal plant near Nevada, being "paid four to five times as much per megawatt-hour as natural-gas powered plants." But, very quietly, Ivanpah has become a big natural gas plant.

That's because Ivanpah uses gas to preheat water that goes into boilers mounted on three 459-foot-tall towers, allowing "heat from the sun – captured by 352,000 mirrors – to make steam more quickly. The steam turns the turbines that produce electricity."

In 2014, enough natural gas was used at Ivanpah to meet the annual power needs of 17,000 California homes, or over 25% of the plant's total projected electricity output. Thus, Ivanpah is a hybrid gas and solar power plant,...

More to the point, the rest of the country is subsidizing this "hybrid" plant


Although owned by Google, NRG Energy, and Brightsource, who have a market cap over $500 billion, "The U.S. Department of Energy granted Ivanpah $1.6 billion in loan guarantees. As a green-energy project, it also qualified for more than $600 million in federal tax credits." Production is often 30-35% below expectations, a lack of generation that has increased the calls for Ivanpah to shutdown.

Ah, who pays for those loan guarantees and federal tax credits? The American taxpayer, most of whom do not live in California.

A long time ago I took an economics course which used as a text a book, Tanstaafl (There Ain't No Such Thing as a Free Lunch) - A Libertarian Perspective on Environmental Policy (and, yes, the concept is from Heinlein's The Moon Is a Harsh Mistress)- about which Amazon's blurb says,


In its most basic application, the TANSTAAFL principle is a simple statement of reality: everything of value has a cost. The TANSTAAFL principle can also be interpreted as a mandate for a policy of full-cost pricing. In a world where resources are scarce, everything has a cost. Scarce resources are used most efficiently when the price paid by the final user reflects all costs, including waste disposal, harm from pollution, and depletion of non-renewable resources.

Now, Californians already pay the highest energy prices in the country, but I am not sure they paying "full cost" pricing - instead, they seem to have shifted some large part of that burden to the rest of us. But should the element seeking secession prevail, the cost of independence might prove much higher than expected.
Posted by Mark Tempest at 4/18/2018 02:53:00 PM