Please join us at 5pm EDT on 22 April 2018 for Midrats Episode 433: Reform, Readiness and the Navy's Path Ahead, with Dr. James Holmes


How is our Navy making progress in adjusting how we man, train, and operate our forces following the series of lessons identified in the
wake of 2017's series of mishaps that left ships damaged, reputations destroyed, and 17 Sailors dead? 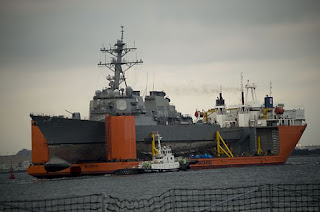 For the full hour to discuss where we are and the way forward will be returning guest Dr. James Holmes. We will use his recent comments from Asia Times and The National Interest as starting points for a broad ranging conversation.

Dr. Holmes is a professor of strategy and former visiting professor of national security affairs at the Naval War College, where he is the inaugural holder of the J. C. Wylie Chair of Maritime Strategy. A former U.S. Navy surface-warfare officer and combat veteran of the first Gulf War, he served as a weapons and engineering officer in the battleship Wisconsin, engineering and firefighting instructor at the Surface Warfare Officers School Command, and military professor of strategy at the Naval War College. He was the last gunnery officer to fire a battleship’s big guns in anger.

The book he co-authored with Toshi Yoshihara, Red Star over the Pacific, is out in its second edition this fall.