Saturday Is Old Radio Day: You Are There "Lexington, Concord, and Merriam's Corner" (1948)

The Royal government marches to seize weapons from the colonists. 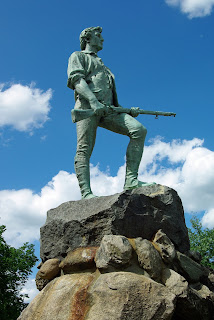 On a stretch of country road from Boston to Concord, a prolonged skirmish between about 3,500 colonial militiamen and 1,700 British soldiers opened the American Revolution. The initial fighting in the war was a local action between Britain and her rebellious colony of Massachusetts. The government had clamped down in reaction to the colony’s resistance to British economic policies.

For a year, the British army, under Gen. Thomas Gage, had occupied Boston. Pressed by the ministry in London to quell rebellion by arresting Samuel Adams and John Hancock, Gage chose instead to take away the patriots’ arms supply in Concord. But incompetence and miscalculation doomed what he meant to be a limited, routine operation. Gage depended on secrecy to seize the arms before the people of Concord could resist, but Boston knew of the operation before his troops left, and the arms at Concord were soon hidden. Couriers Paul Revere and William Dawes notified Adams and Hancock in Lexington that the British were on their way. Mix-ups delayed the British departure for hours, giving the colonists more time to prepare.

Here is the start of the American revolution as it could have been reported by modern (well, 1948 modern) technology: