China is hopeful for “new progress” to be made in ongoing talks with the Asean bloc for a code of conduct governing the disputed South China Sea, Premier Li Keqiang said at a summit on Sunday, as other regional leaders called for countries to exercise restraint over the row.
Li’s comments at the twice-yearly Association of Southeast Asian Nations meeting comes amid flaring tensions between Vietnam and Beijing over the dispute triggered by a Chinese oil survey vessel that remained within waters claimed by the Southeast Asian country for more than three months.
“We stand ready to work with Asean countries building on the existing foundation and basis to strive for new progress in the [code of conduct], according to the three-year time frame, so as to maintain and uphold long term peace in the South China Sea,” Li said at the start of a plenary session with the 10 Asean leaders.

This bit of double talk - after all, which country is the one stirring up tension with its neighbors with excessive claims to rights that violate the other countries territorial and exclusive economic zones (EEZs) - was reported by the SCMP with the accompanying map: 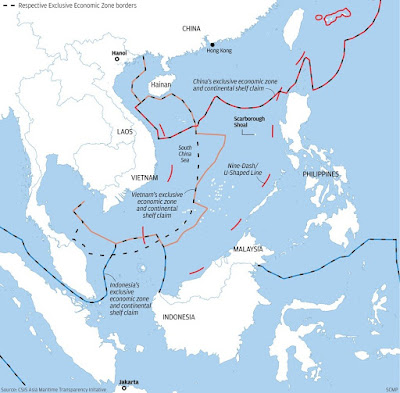 You might notice that China's famous "9 dash line" encroaches on the sovereign waters of Vietnam, the Philippines, Malaysia, and judging by the SCMP map, the Japanese Senkaku Islands. You might also note that the SCMP map leaves off the EEZs of the Philippines and Malaysia and Japan. For those, we need another map, this one from the Voice of America : 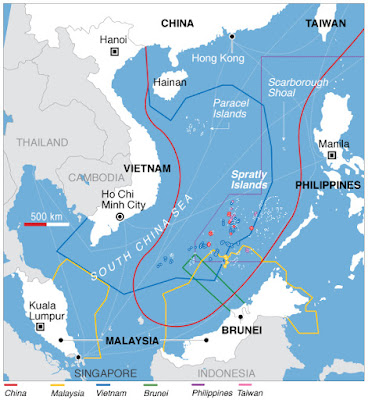 Or perhaps this one from the American Center for Democracy: 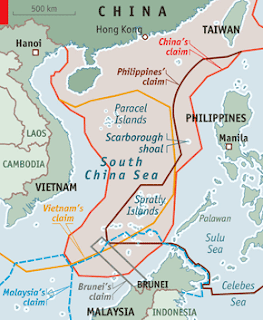 Recall that the claims of all parties, are in part, based on assertions of ownership of various islands or rocks in the SCS. China also bases its claims on a theory of historical usage. China claims were rejected by an international tribunal. As with so much else that is modern, China disavows that ruling:


China said it did not recognize the ruling, which it described as "null and void." The case was brought by the Philippines over China’s vast territorial claims and island-building in the region.

The ruling from the Permanent Court of Arbitration in The Hague, Netherlands, is the first to address competing claims and interests among a half-dozen countries fronting the South China Sea.

The panel said any historic rights to resources that China may have had were invalid if they are incompatible with exclusive economic zones established under a United Nations treaty.

The tribunal also ruled that China caused “irreparable harm” to the marine environment, “unlawfully” interfered with fishermen from the Philippines, and engaged in a massive land-reclamation and island-building campaign that is “incompatible” with international obligations.

In fact, Mr. Li has been pretty belligerent:


China is committed to peace but cannot give up “even one inch” of territory that the country’s ancestors left behind, Chinese President Xi Jinping told U.S. Defense Secretary Jim Mattis on Wednesday during his first visit to Beijing.

Xi’s remarks underscored deep-rooted areas of tension in Sino-U.S. ties, particularly over what the Pentagon views as China’s militarization of the South China Sea, a vital transit route for world trade.