With the sequel to "Top Gun" coming up, if you ever wore the 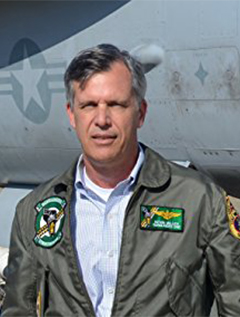 uniform of the US Navy, you're going to get asked a lot of questions.

For this week's show we are going to talk about today's Naval Aviation experience with author Kevin Miller, CAPT, USN (Ret.)

Kevin is a third generation naval officer. He graduated from the University of Mississippi and was designated a Naval Aviator in August 1983. In his career he flew the A-7E Corsair II and FA-18C Hornet, deploying overseas six times throughout the 1980’s and 90’s aboard the aircraft carriers Nimitz, Dwight D. Eisenhower, George Washington, Theodore Roosevelt and Enterprise. He finished his career in the Pentagon serving on the staff of the Secretary of the Navy, retiring in 2005.

After leaving the service Kevin was employed as an associate at two Washington DC defense consulting firms, and it was during this time he drafted his first novel Raven One. In 2010 he joined the Naval Aviation Museum Foundation as Executive Vice President and Chief Operating Officer. Today he is a self-employed defense consultant, Amazon Best-Selling author of the military action-adventure novels Raven One and Declared Hostile and serves as Vice President of Legislative Affairs for the Tailhook Association.

Kevin earned a Master of Science in Business Management from Florida State University and a Master of National Security Policy and Strategic Studies from the Naval War College.

If you can't catch the show live and you use Apple Podcasts, you can pick up the episode and others and add Midrats to your podcast list simply by clicking the button at the main show page - or you can just click here. Or on Spreaker. The show also is reportedly on Spotify.
Upate:
Listen to "Episode 513: Naval Aviation with Kevin Miller" on Spreaker.
Posted by Mark Tempest at 11/02/2019 09:35:00 AM