A centrefold graphic recently flourished intimate details of a Chinese bomber carrying a stark new weapon. State-controlled media has since gone into cover-up mode. But military analysts think Beijing may have been caught with its pants down. The government produced Modern Ships magazine has splashed high-resolution computer-generated images of China’s most recent addition to its strategic bomber line-up – the H-6N – over the front and feature pages. But that’s not what drew the eye of the world’s defence thinkers. The graphics showed the new bomber carrying a huge ballistic missile slung under its fuselage. And that missile looks a lot like one of a family of ballistic weapons deployed by China’s People’s Liberation Army Rocket Force (PLARF) as aircraft carrier killers.

I have my doubts that this was "accidental" - thinking it's more of a psyop, but it does raise some ideas to counter such weapons - ideas that our parents and grandparents (oh, hell, maybe even our great grandparents) thought up way back when in the fun days of the Cold War.

So, what do you do to counter a relatively slow moving bomber that flies out to launch a big ASBM? You do what we used to do against the kamikaze planes of the Japanese in WWII and the Soviet threat in the Cold War - you station "pickets" of various kinds to detect and report activity that might threaten your forces. In WWII, it was "radar picket destroyers." During the Cold War we had radar picket submarines
:


By this time, the Cold War with the Soviet Union was in full swing, and air defense of U.S. carrier battle groups on potential strike missions near the Russian landmass generated a requirement for even more submarine radar pickets. Eventually, six more World War II submarines - all Manitowac-built USS Gato (SS-212)-class boats - were chosen for the more drastic MIGRAINE III SSR conversion. Because experience had shown that even the newer SSR configurations were seriously cramped, the final MIGRAINE design

called for cutting the boats in two and inserting a 24-foot "plug" to get additional room for an expanded CIC and electronic spaces forward of the main control room. Even so, the MIGRAINE IIIs also had to sacrifice their after torpedo tubes for more berthing space, but they were fitted with a larger, streamlined sail, with the BPS-2 search radar mounted aft of the periscopes and other masts. An AN/BPS-3 height-finder radar on a pedestal just behind the sail and an AN/URN-3 TACAN beacon on the afterdeck completed the installation. The six MIGRAINE III boats - USSs Pompon (SSR-267), Rasher (SSR-269), Raton (SSR-270), Ray (SSR-271), Redfin (SSR-272), and Rock (SSR-274) - were all converted at the Philadelphia Navy Yard between 1951 and 1953 - giving the Navy a total of ten radar picket submarines to face the growing Soviet threat just as the Korean War was drawing to a close.

There were also radar picket ships of the Guardian class: 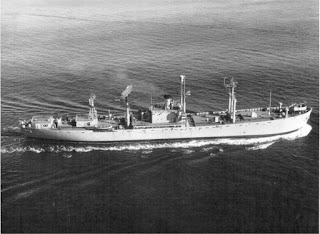 The AGRs were based on both coasts at Newport, Rhode Island (later Davisville, Rhode Island) and Treasure Island, California near San Francisco, eight on the East Coast and eight on the West Coast. They would spend 30–45 days at sea regardless of weather, alternating with 15 days in port, monitoring aircraft approaching the United States as an extension of the Distant Early Warning line under the Continental Air Defense Command. Their primary duty was to warn of a surprise Soviet bomber attack. The AGRs were augmented by twelve radar picket destroyer escorts of the Edsall and John C. Butler classes, known as DERs, and Lockheed WV-2 Warning Star aircraft. The DERs and WV-2s were called Barrier Forces, BarLant and BarPac, and operated much further from the US than the AGRs. By 1965, the development of over-the-horizon radar had superseded their function, and the radar picket ships were decommissioned and scrapped by the early 1970s.

Now we already have "over the horizon radar", including the "big ball on a oil platform" - SBX-1 (pdf) and a bunch of other stuff to look for missiles, which is exactly what the H-6N is - with a slow launch phase (under 600 knots) followed by a more rapid phase after the booster on the missile engages.

These are modern times. We have Aegis ships, anti-ballistic missile missiles, and satellites that monitor such things.

Let's suppose we decide for a "belt and suspenders" approach that some additional pickets might be a good idea - could we use long lingering UAVs akin to the solar power NASA Pathfinder to keep an eye on things? Of
course we could, in fact, the idea has already been looked at:


In 1993, after ten years in storage, the aircraft was brought back to flight status for a brief mission by the Ballistic Missile Defense Organization (BMDO). With the addition of small solar arrays, five low-altitude checkout flights were flown under the BMDO program at NASA Dryden in the fall of 1993 and early 1994 on a combination of solar and battery power.

No much in new thinking under the sun.

From the surface of the sea side, there is little reason why unmanned platforms, now being developed for anti-submarine warfare, Sea Hunter cannot also be adapted for use as radar pickets, perhaps with passive sensor characteristics.

The point to all this being that the threat of aircraft launched ASMs or even ASBMs is not a sea change, but merely a logical follow on weapon for a country as geographically limited as is China. And that we've seen threats like this before and found ways to limit them.

As an aside, the U.S. played with Air Launched Ballistic Missiles in the past (1974), see