On Midrats 24 November 2019 - Episode 516: Making the Fleet Ready for a Peer Challenge, with Bryan McGrath

Please join us at 5pm EST on 24 November 2019 for Midrats Episode 516: Making the Fleet Ready for a Peer Challenge, with Bryan McGrath


Keeping a fleet ready for war is a process of years of careful, consistent, and sustained stewardship of both personnel and material.

The easiest parts are the buying of equipment and recruiting new people.The hard parts, maintenance, training, and retention – mostly because they are hard – rarely break in to the open.

For our fleet, the structure we live in is the Optimized Fleet Response 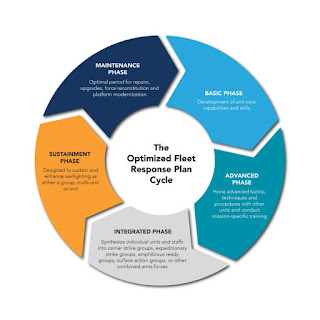 Plan (OFRP). It is a system few understand well, but is one designed around a peace time “efficiency” with only a passing interest in wartime “effectiveness.”

Decades of dominance at sea has provided the US Navy the luxury of such, but as China expands her fleet at an alarming rate – do we need a new construct?

Our guest for the full hour to discuss this and related topics will be Bryan McGrath, CDR USN (Ret.).

If you can't catch the show live and you use Apple Podcasts, you can pick up the episode and others and add Midrats to your podcast list simply by clicking the button at the main show page - or you can just click here. Or on Spreaker. The show also is reportedly on Spotify.
Posted by Mark Tempest at 11/23/2019 07:00:00 AM