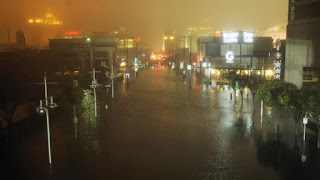 For those of you contemplating buying beach front homes in the next 100 years or so, here's a cautionary report that seas are rising faster than previously projected, "Could Estimates of the Rate of Future Sea-Level Rise Be Too Low?":


Sea levels are rising faster than expected from global warming, and University of Colorado geologist Bill Hay has a good idea why. The last official IPCC report in 2007 projected a global sea level rise between 0.2 and 0.5 meters by the year 2100. But current sea-level rise measurements meet or exceed the high end of that range and suggest a rise of one meter or more by the end of the century.

For those of you still following the "English" system, one meter is a little over 3 feet.

For those of you seeking some geologic background, consider this:


During most of the last 1 billion years the earth had no permanent ice. However, sometimes large areas of the globe were covered with vast ice sheets. These times are known as ice ages.

So, "no permanent ice" for a billion years or so, but now it is a crisis? Well, if you live along the sea, as something like 80% of the world's population does.

I am not a climate change denier, as I have repeatedly stated. But I am interested in how often the earth's climate has changed and when.

Around 15,000 years ago much of North America (okay, almost all of Canada and a big swath of the northern U.S.) was covered by a big glacier. See the graphic I have liberated from the Illinois State Museum that shows the retreat of that glacier ice, leaving us, among other things, the Great Lakes.


Ice ages are recurring periods in the Earth's history, usually thousands or tens of thousands of years in length, when the entire Earth experiences colder climatic conditions. During these periods, enormous continental glaciers called ice sheets cover large areas of the Earth’s surface. Ice ages are separated by warmer periods called interglacial periods. Several ice ages have occurred throughout our planet's history. The last ice age peaked about 18,000 years ago, after which the Earth again began to warm.
***

We are now in a warm period that has lasted more than 10,000 years, which is longer than many of the previous warm intervals. If the pattern of glacial cycles holds true, scientists believe the Earth is soon due for another cold period. In the 1800s, global temperatures began decreasing during a period known as the Little Ice Age. Currently, patterns indicate that the Earth is nearing the end of an interglacial period, meaning that another ice age is predicted in a few thousand years.

Then there is the Milankovitch theory:


These three factors—tilt, orbital shape, and precession—combine to create changes in climate. Since these dynamics are operating on different time scales, their interactions are complicated. Sometimes their effects reinforce each other and sometimes they tend to cancel each other. For example, 11,000 years from now when precession has caused the Northern Hemisphere summer to begin in December, the effect of an increase in solar radiation at the perihelion in January and decrease at the aphelion in July will exaggerate Northern Hemisphere seasonal differences rather than soften them as is the case today.

Oh good, something to look forward to.

UPDATE: Wondering why this post appears on a maritime security blog? Ships being built today and planned for in the near term and the naval and Coast Guard force the United States must include thinking about such matters as a changing coastline in the U.S. and abroad.