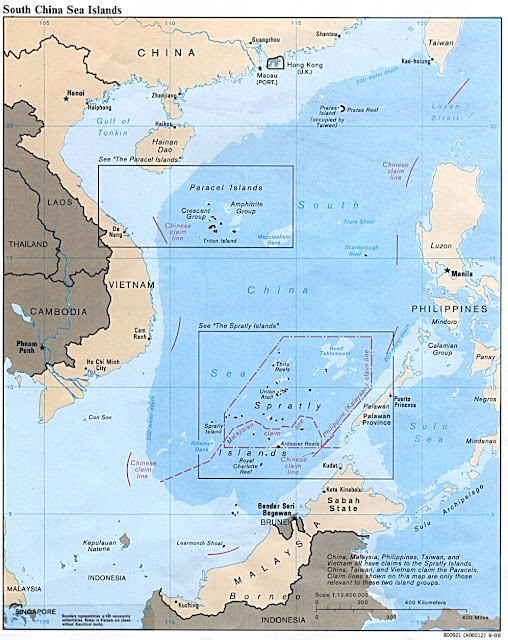 China is doing one of its usual song and dance routines with respect to its claims to a large chunk of the South China Sea. First, it announces an increase in the authority of its "patrols" in the area as set out in Patrols in Hainan get more clout:


Police in Hainan will be authorized to board and search ships that illegally enter the province's waters in 2013, the latest Chinese effort to protect the South China Sea.

Under a set of regulation revisions the Hainan People's Congress approved on Tuesday, provincial border police are authorized to board or seize foreign ships that illegally enter the province's waters and order them to change course or stop sailing.

The full texts of the regulations, which take effect on Jan 1, will soon be released to the public, said Huang Shunxiang, director of the congress's press office.

Activities such as entering the island province's waters without permission, damaging coastal defense facilities, and engaging in publicity that threatens national security are illegal.

If foreign ships or crew members violate regulations, Hainan police have the right to take over the ships or their communications systems, under the revised regulations. (emphasis added)

Of course, this was followed by other semi-disclaimers, see China values free navigation in S. China Sea for example:

Hong made the remarks in response to a question regarding recent reports that border patrol police in south China's island province of Hainan were given the power to embark on and check ships that illegally enter its waters.

China conducts marine management in accordance with international law and national law and safeguards its territorial sovereignty and rights over the South China Sea, the spokesman said.

"Meanwhile, we insist that all relevant disputes with neighboring countries should be resolved through friendly negotiation and consultation," Hong said.

All countries have freedom of navigation in the South China Sea in accordance with international law, he said.

"China highly values free navigation in the South China Sea," Hong said. "At present, there are no problems in this regard."


China's Defense Ministry spokesman on Thursday stressed that the country's move to build itself into a maritime power has nothing to do with seeking hegemony.

China wants to become a maritime power in order to enhance its capacity to exploit marine resources, develop the marine economy, safeguard the country's maritime rights and interests, and ensure a sustainable economic and social development, Geng Yansheng told a regular press conference.

That does not mean that China is aiming at expanding its presence at sea, nor at marine hegemony, Geng said.

Chinese leader Hu Jintao's report to the 18th National Congress of the Communist Party of China earlier this month spelt out future efforts to build China into a maritime power.

The spokesman further denied interpretations that this position indicates a more hardline approach by China in its marine sovereignty claims, such as over the Diaoyu Islands.

"China's stance of safeguarding the country's legitimate sovereign rights and interests should not be regarded as a hardline approach," he said.

According to Geng, China will resolutely protect its sovereignty, security and development interests and will never yield to any outside pressure.

Safeguarding the country's marine rights and interests is one of the military's important duties and the army will well perform its duties under the country's deployment, Geng said.

Meanwhile, the spokesman noted, China is always committed to peaceful settlement of international disputes and opposes the wanton use of force or threat to use it.

China's armed forces advocate and follow the concept of a "harmonious ocean," and comply with the UN Charter as well as other international laws and rules, Geng said, adding that the Chinese military is active in taking part in international dialogue and cooperation in marine security and is willing to join other countries in maintaining security at sea.

Oh, yeah, and what the heck is "engaging in publicity that threatens national security?"