The Next Ice Age Cometh, But Slowed By Man? 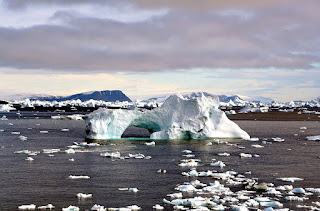 With a hat tip to Instapundit and a link to my earlier post Sea Levels and Ice Ages, now comes a new scientific report, "Human Carbon Emissions Seen by Researchers Holding Back Ice Age":

Human emissions of fossil carbon into the atmosphere and the resulting increase in temperatures may be holding off the next ice age, according to research from Sweden’s University of Gothenburg.

“We are probably entering a new ice age right now,” Lars Franzen, a professor of physical geography at the university, was cited as saying in an online statement today. “However, we’re not noticing it due to the effects of carbon dioxide.”
***
. . . “If we accept that rising levels of carbon dioxide in the atmosphere lead to an increase in global temperature, the logical conclusion must be that reduced levels lead to a drop in temperature.”

There does seem to be a sort of logic in that.

Some say the world will end in fire,
Some say in ice.
From what I've tasted of desire
I hold with those who favor fire.
But if it had to perish twice,
I think I know enough of hate
To say that for destruction ice
Is also great
And would suffice.