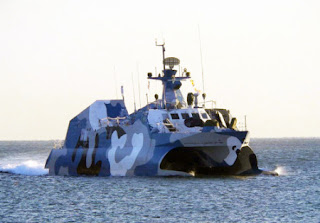 A brace of articles by James R. Holmes: The second of which refers to the first - here's the second - How to Measure China’s Maritime Power :


Bumper sticker: it's tough to predict how swiftly and surely PLA Navy hardware and crews will mature, but China will remain a seafaring power in the broadest sense of the term. It will remain a power to reckon with.

And, the first, which lies behind a Foreign Policy login
Red Tide: Just how strong is China's navy, really?:


Presently, there's reason to question the PLA Navy's battle-worthiness. If the PLA Navy operates at a higher tempo over the next decade, keeping task forces at sea for weeks or months at a time, it will evolve into a formidable force.

Well, as most military thinkers know, it helps to have interior lines of communication, which China seeks inside the "first island chain."

We discussed some of the issues involving China with Professor Holmes's frequent partner in writing on Midrats recently in Episode 187: From I to C of the BRIC with Toshi Yoshihara
Posted by Mark Tempest at 8/13/2013 10:10:00 AM