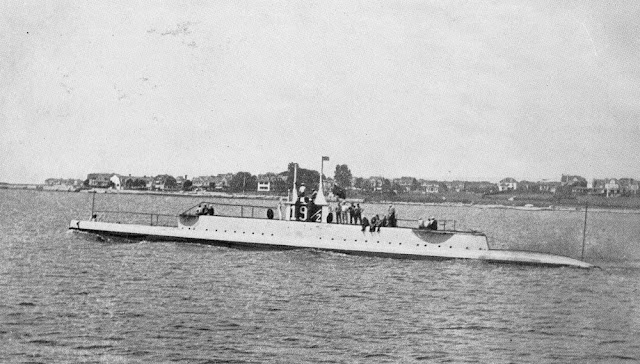 With a hat tip to PigBoats.com's "The Wackiest Sub in the Navy", which you ought to read.


USS G-1, a 400-ton Lake type submarine, was built at Newport News, Virginia. Launched with the name Seal, she was renamed G-1 in November 1911 and commissioned in October 1912. Her first years of service were spent operating with the Atlantic Torpedo Flotilla, including a cruise off the East Coast in March-May 1915. From the middle of that year, she was employed in experimental and training duties in the Long Island Sound area, operating out of the New London Submarine Base, Groton, Connecticut. During 1918 she also briefly conducted anti-submarine patrols in that vicinity. USS G-1 was decommissioned in March 1920 and expended in depth charge tests in June 1921.

Photo credit to NavSource which posted it with this comment: "Photo Submarine Force Museum and Library and submitted by Robert Hurst."

Among other wrinkles in the 19 1/2 design were wheels for "bottom crawling."

Her designer, Simon Lake, is well-described in Edward C. Whitman's The Submarine Heritage of Simon Lake:


. . . two of Lake's most characteristic design features - hull-mounted wheels for bottom crawling and "level diving" by means of amidships hydroplanes - became an intriguing "road not traveled" in the evolution of submarine design.
***
Lake's 1893 design, for which he applied for a patent in April of that year, reflected his early interest in developing submarines primarily for commercial purposes, and particularly for marine salvage. It was intended to submerge on an even keel using a combination of judicious ballasting and horizontal control planes and to operate largely on the ocean bottom using a set of powered wheels for propulsion.


Built under a subcontract with Newport News Shipbuilding in fiscal year 1908, USS Seal (later G-1) was Lake's first U.S. Navy submarine - and after 19 predecessors, the first U.S. submarine not built by Holland and/or Electric Boat. Clearly an afterthought, she was later designated SS-19 1/2 a source of some amusement to Lake and his colleagues. Seal was launched in February 1911 and commissioned in October of the following year. In design, she was very similar to the Kaimans that Lake had built for Russia, and at 516 tons and 161 feet long, she was essentially intended for harbor defense or coastal patrols. As built, Seal had Lake's customary wheels, amidships planes, and an airlock, as well as trainable (external) torpedo tubes mounted in the superstructure. Her twin screws were powered by four 300-horsepower gasoline engines (two in tandem on each shaft) and 375- horsepower electric motors. Although Seal was a notoriously slow diver, and her tandem engines caused recurring breakdowns until one of the two on each shaft was removed in 1916, she squeaked through her trials, and Lake was paid.