On Midrats 18 August 13, Episode 189: "The Union and Confederate Navies" with James M. McPherson 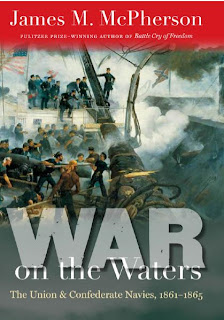 The War Between the States, the American Civil War - whichever description you prefer - this crucible on which our nation was re-formed has legions of books, movies, and rhetoric dedicated to it. Most of the history that people know involves the war on land, but what of the war at sea?

What are details behind some of the major Naval leaders of both sides that are the least known, but are the most interesting? What challenges and accomplishments were made by the belligerents in their navies, and how do they inform and influence our Navy today?

Our guest for the full hour to discuss this and more will be James M. McPherson, the George Henry Davis '86 Professor of History Emeritus at Princeton University. He has published numerous volumes on the Civil War, including the Pulitzer Prize-winning Battle Cry of Freedom, Crossroads of Freedom (which was a New York Times bestseller), Abraham Lincoln and the Second American Revolution, and For Cause and Comrades: Why Men Fought in the Civil War, which won the Lincoln Prize.

As a starting off point for the show, we will be discussing his book, War on the Waters: The Union and Confederate Navies, 1861-1865.