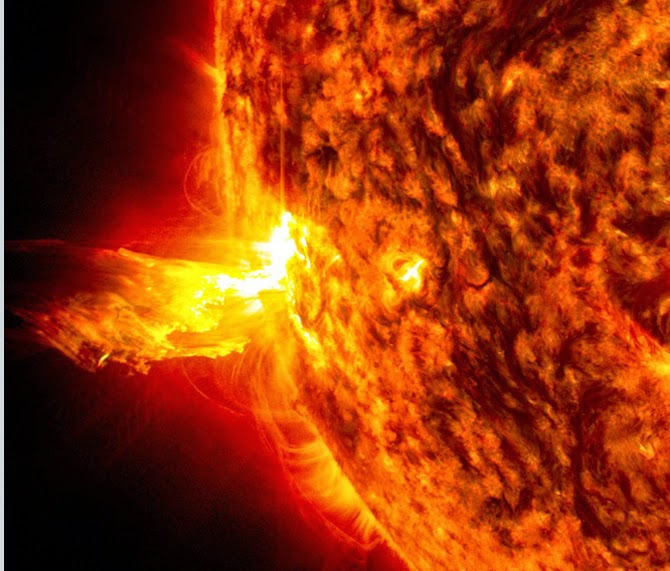 "'Extreme solar storm' could have pulled the plug on Earth" screams the headline. "'Pushed back to the Stone Age': massive solar storm missed Earth by just one week" says another.

After living in the woods with the bears and bunnies for a week or so, it was interesting to come home and read about a "near miss" of a solar event in 2102 - two years ago. If it had been last week, I might not have noticed given how I was living.

But, given the hype, I wondered - what is the risk of the sun sending us back to the Stone Age?

NASA has a piece up on "Space Weather", which includes a nice description of the effects of coronal mass ejections (CMEs) and the issues they might cause:


The most serious effects on human activity occur during major geomagnetic storms. It is now understood that the major geomagnetic storms are induced by coronal mass ejections (CMEs). Coronal mass ejections are usually associated with flares, but sometimes no flare is observed when they occur. Like flares, CMEs are more frequent during the active phase of the Sun's approximately 11 year cycle. The last maximum in solar activity was in the year 2000. The next maximum is expected to occur in 2013.

Coronal mass ejections are more likely to have a significant effect on our activities than flares because they carry more material into a larger volume of interplanetary space, increasing the likelihood that they will interact with the Earth. While a flare alone produces high-energy particles near the Sun, some of which escape into interplanetary space, a CME drives a shock wave which can continuously produce energetic particles as it propagates through interplanetary space. When a CME reaches the Earth, its impact disturbs the Earth's magnetosphere, setting off a geomagnetic storm. A CME typically takes 3 to 5 days to reach the Earth after it leaves the Sun. Observing the ejection of CMEs from the Sun provides an early warning of geomagnetic storms. Only recently, with SOHO, has it been possible to continuously observe the emission of CMEs from the Sun and determine if they are aimed at the Earth.

One serious problem that can occur during a geomagnetic storm is damage to Earth-orbiting satellites, especially those in high, geosynchronous orbits. Communications satellites are generally in these high orbits. Either the satellite becomes highly charged during the storm and a component is damaged by the high current that discharges into the satellite, or a component is damaged by high-energy particles that penetrate the satellite. We are not able to predict when and where a satellite in a high orbit may be damaged during a geomagnetic storm.
***Another major problem that has occurred during geomagnetic storms has been the temporary loss of electrical power over a large region. The best known case of this occurred in 1989 in Quebec. High currents in the magnetosphere induce high currents in power lines, blowing out electric transformers and power stations. This is most likely to happen at high latitudes, where the induced currents are greatest, and in regions having long power lines and where the ground is poorly conducting.

These are the most serious problems that have occurred as a result of short-term solar activity and the resulting geomagnetic storms. A positive aspect of geomagnetic storms, from an aesthetic point of view, is that the Earth's auroras are enhanced.

The damage to satellites and power grids can be very expensive and disruptive. Fortunately, this kind of damage is not frequent. Geomagnetic storms are more disruptive now than in the past because of our greater dependence on technical systems that can be affected by electric currents and energetic particles high in the Earth's magnetosphere.

Could a solar flare or CME be large enough to cause a nation-wide or planet-wide cataclysm? It is, of course, impossible to give a definitive answer to this question, but no such event is known to have occurred in the past and there is no evidence that the Sun could initiate such an event.

Less restrained in its language is this Press Release:


Ashley Dale, from the University of Bristol, was a member of an international task force – dubbed SolarMAX – set up to identify the risks of a solar storm and how its impact could be minimized, explains how it is only a matter of time before an exceptionally violent solar storm is propelled towards Earth.

Such a storm would wreak havoc with our communication systems and power supplies, crippling vital services such as transport, sanitation and medicine.

In this month's issue of Physics World, Ashley writes: “Without power, people would struggle to fuel their cars at petrol stations, get money from cash dispensers or pay online. Water and sewage systems would be affected too, meaning that health epidemics in urbanized areas would quickly take a grip, with diseases we thought we had left behind centuries ago soon returning.”

You know, as so well said in Ghostbusters:

Well, let's think about this. If you have 3 to 5 days to prepare for a disaster like this, what should you do?

Okay - what are the weakest links in the survival chain? Somebody looked at them in 2005 here and pointed to the biggest issue:


Electrical Power - The North American power grid continues to operate on declining margins, and with only modest infrastructure back up for its critical transformers. There have been three major blackouts in the last 10 years affecting 50 million people. Replacement parts for the largest transformers at 500 - 700 kiloVolts require long lead times of over 12 months, and are only supplied by foreign companies. The current stockpile for these critical items is fewer than the number of likely failures during the most severe space weather storms of the last 150 years. However, although there have been several near-blackouts of portions of the US electrical grid by space weather events since 1998, operators have been able to avoid these blackouts so far. In the next 5 years, the construction of new power plants will continue to fall behind the domestic need for power, and margins will decline to between 1 and 5% in most areas. Space weather forecasting techniques are slowly being adopted, but the chief data resource, the NASA ACE satellite, is operating beyond its mission lifetime and will be decommissioned by 2007, leaving the US power grid without any advanced warning of impending space weather storms. This quantity is assessed to be Poor.


Briefly, a really big CME will—not could, but will—collapse the entire North American electric grid. Based on research by Lloyd's of London, there is a 1 in 150 chance of having a CME equal to the largest one on record, in 1859. The probability of a smaller CME that is equivalent to the one that shut down the electric power grid in Quebec, Canada in 1989 is 1 in 50. Compare these to the probability of someone dying in a traffic accident, which is 1 in 6,584. The probability of a CME is 44 to 132 times higher than dying in a car accident!

Importantly, we know with 100% certainty that a CME will, in fact, occur. This is a natural phenomenon, a normal process for the sun that has been going on for millions of years and will continue for many more millions of years. There are currently no preparations made across the entire U.S. power grid to accommodate and mitigate CME impacts. 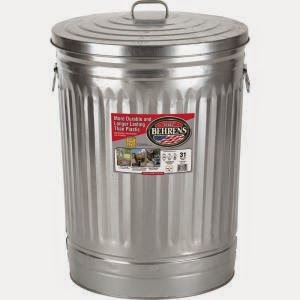 A reasonable person might weigh the risk of a solar event and other events that might cause a grid failure and buy a decent generator to be kept in a Faraday cage (touched on here). There is a great deal of free advice on the internet regarding Faraday cages, e.g. Build Your Own Faraday Cage. Here’s How. or How Faraday Cages Work. It's a fun hobby and will keep you off the streets. Don't forget that one of those metal garbage cans you can buy at the local hardware store can make a good Faraday "cage" for small electronic devices if properly set up - see Budget Prep: Faraday Cage. The last site makes a good point about one thing that ought to be in your trash can/Faraday can:


Having a small solar panel, along with a battery charger and rechargeable 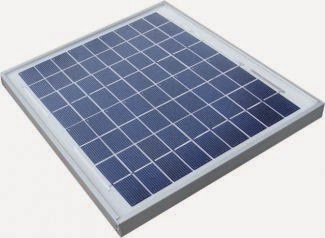 batteries, can keep your electronic equipment running, even if the whole power grid goes down.

And you ought to have all those normal disaster recovery things that make a good recovery kit - like water filters, water carrying containers, etc. You can look back at old Disaster Prep Wednesday posts on this site for ideas. I think clicking on the label will bring them all up.

Transportation? Got a bike? A good pair of hiking boots?

Food? You might want to have a supply on hand. One person's review of one brand here. You can buy a month's worth ( for 1 person) of this stuff from Amazon for about $130 of so. Buy a bucket a month until you have the supply that you think you need. They appear to have a long shelf life.

You might want to stock up on things like Tabasco sauce and other flavorings, too. On the other hand, if you get hungry enough you will eat almost anything and enjoy it.

Doomed by a solar CME? Not so much, if you prepare. And make use of the 3 to 5 day warning period of a CME to get everything protected.

Or you can do nothing, figuring the risk is low (2% or less?) . . . but I wouldn't come looking for help from me if you discover that you guessed estimated wrong.

UPDATE: From the Lloyd's report linked to earlier:


The risk of intense geomagnetic storms is elevated as we approach the peak of the current solar cycle. Solar activity follows an 11-year cycle, with the most intense events occurring near the cycle peak. For the current Cycle 24, the geomagnetic storm risk is projected to peak in early 2015.
As the North American electric infrastructure ages and we become more and more dependent on electricity, the risk of a catastrophic outage increases with each peak of the solar cycle. Our society is becoming increasingly dependent on electricity. Because of the potential for long-term, widespread power outage, the hazard posed by geomagnetic storms is one of the most significant.

Weighted by population, the highest risk of storm-induced power outages in the US is along the Atlantic corridor between Washington D.C. and New York City. This takes into account risk factors such as magnetic latitude, distance to the coast, ground conductivity and transmission grid properties. Other high-risk regions are the Midwest states, such as Michigan and Wisconsin, and regions along the Gulf Coast.

The total U.S. population at risk of extended power outage from a Carrington-level storm is between 20-40 million, with durations of 16 days to 1-2 years. The duration of outages will depend largely on the availability of spare replacement transformers. If new transformers need to be ordered, the lead-time is likely to be a minimum of five months. The total economic cost for such a scenario is estimated at $0.6-2.6 trillion USD