U.S. Navy's Asymmetric Payloads: "Mine and Undersea Warfare for the Future" 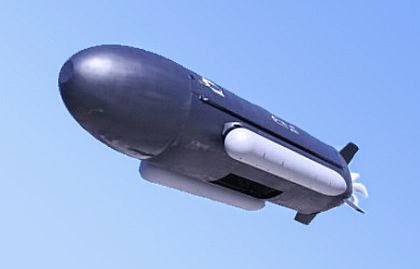 An interesting free article from the U.S. Naval Institute's Proceedings, Mine and Undersea Warfare for the Future by Joshua J. Edwards and Captain Dennis M. Gallagher, U.S. Navy:


Vice Admiral Conner recognizes that the United States’ and its allies’ current and future interests in national security will depend on a survivable, lethal undersea force. Such a force will consist of smart payloads and unmanned vehicles in an affordable manner to satisfy financial and industrial constraints. Technical advances have opened a floodgate of possibilities for asymmetric solutions, and clandestine, unmanned offensive mining is just the beginning. The Office of Naval Research (ONR) has invested in an affordable idea to minimizing risk and task to traditional forces.

The Advanced Undersea Weapon System (AUWS) is a group of unmanned systems (sensors, effectors, communications, and vehicles) that can be pre-positioned to autonomously and persistently influence the adversary at a time and place of our choosing. The ONR capabilities are specific components of the AUWS program currently being developed in conjunction with a large unmanned undersea vehicle (UUV), a relatively few miniature torpedoes, and many distributed mine sensors to address the threat of adversary ships and submarines. The AUWS will give commanders the ability to deploy sensors and weapon nodes as a minefield while maintaining the capability to remotely activate and deactivate the weapons. It will also maintain positive control of lethal weapons throughout the operation to ensure the ability to recover unused weapons when desired. The AUWS is a lower-cost force multiplier that will force adversaries to invest in mine-countermeasures capabilities.

This concept provides asymmetric clandestine solutions that will free traditional platforms to be more effectively employed in a capacity for which they were designed. The AUWS provides commanders with unique operational and tactical options in contested waters without regard to air superiority or water depth, freeing them to act aggressively with autonomous inexpensive tools. Its modular design will allow operators to integrate a wide variety of sensors and weapons, thus tailoring the system for specific missions. Sensors of choice may include short-, mid-, and long-range devices. Kinetic options include submarine-launched mobile mine (SLMM) warheads, torpedoes (CRAW or Mk-54), AIM-9X missile, and projectile explosives. Commanders may also apply deliveries to distort an adversary’s tactical picture through deception (decoys, noisemakers, etc.), ISR packages, and real-time intelligence. The AUWS may be delivered from surface ships, submarines, or aircraft, or it may self-deploy from a friendly port within range. Unmanned vehicles to transport AUWS deliveries may be reusable or expendable.

While the initial focus will be offensive mining, future AUWS missions will include defensive mining, antisubmarine, antisurface, and antiair warfare, intelligence, surveillance. and reconnaissance, pre-positioning of electronic-warfare and strike assets, supporting protective safe havens for resupply, and political leverage through deterrence. This modular architecture allows warfighters, military planners, and engineers to work symbiotically to maximize current capabilities while simultaneously developing new configurations of the AUWS.*** 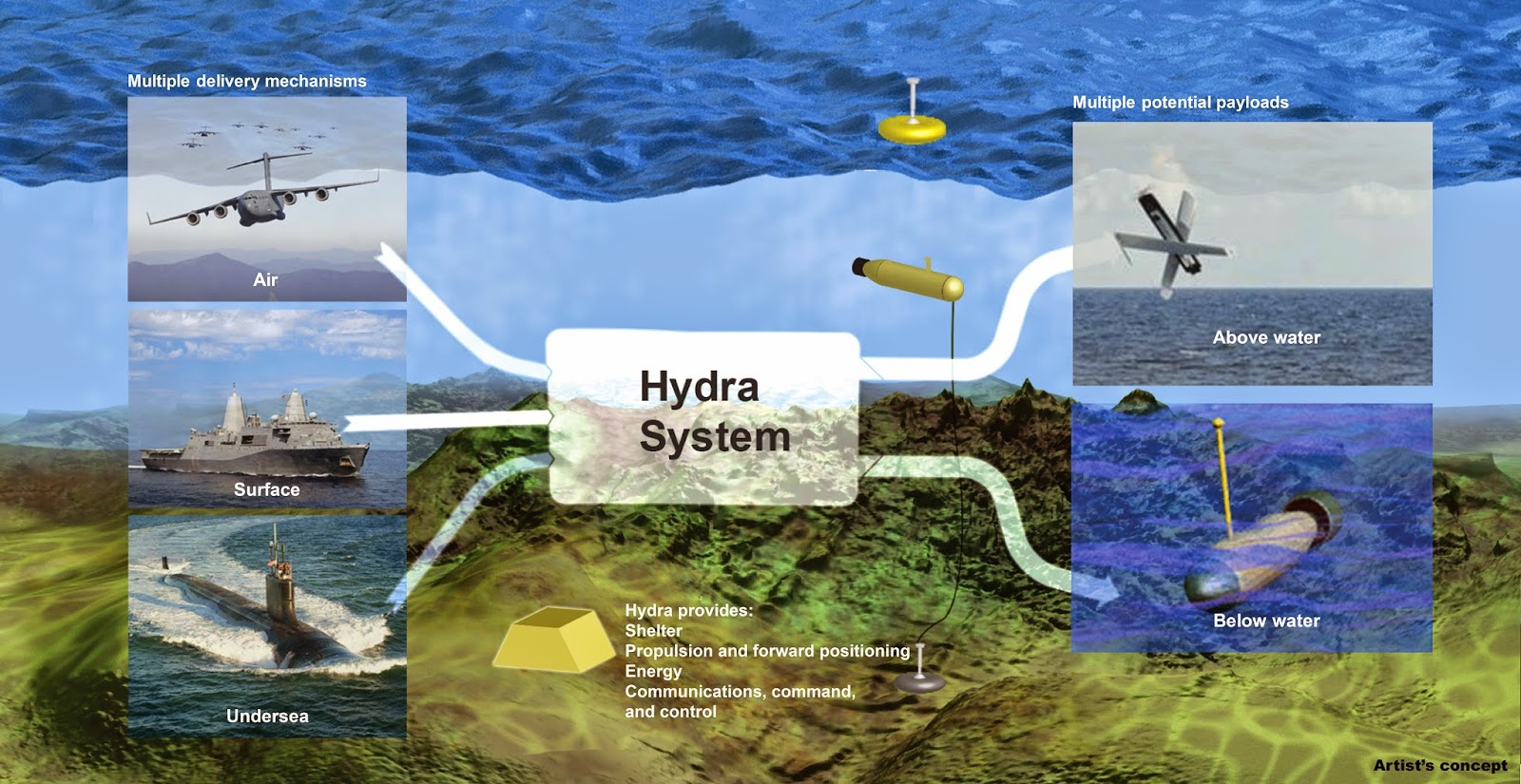 There is discussion of a DARPA approach here:


No matter how capable, even the most advanced vessel can only be in one place at a time. U.S. Navy assets must cover vast regions of interest around the globe even as force reductions and fiscal constraints continue to shrink fleet sizes. To maintain advantage over adversaries, U.S. Naval forces need to project key capabilities in multiple locations at once, without the time and expense of building new vessels to deliver those capabilities.

DARPA initiated the Hydra program to help address these challenges. Hydra aims to develop a distributed undersea network of unmanned payloads and platforms to complement manned vessels. The system would innovatively integrate existing and emerging technologies to deliver various capabilities above, on and below the ocean’s surface. By separating capabilities from the traditional platforms that deliver them, Hydra would serve as a force multiplier, enabling faster, scalable and more cost-effective deployment of assets wherever needed.

Hydra intends to develop modular payloads that would provide key capabilities, including Intelligence, Surveillance and Reconnaissance (ISR) and Mine Counter-Measures (MCM). Each payload module would plug into a standardized enclosure that would securely transport, house and launch various payloads, while sustaining payload functionality for weeks to months. The Hydra system would emphasize scalability, rapid reconfiguration and maximization of payload. Naval forces could deliver the Hydra system by ship, submarine or airplane to littoral ocean zones (shallow international waters near shorelines).


“The climate of budget austerity runs up against an uncertain security environment that includes natural disasters, piracy, ungoverned states and the proliferation of sophisticated defense technologies,” said Scott Littlefield, DARPA program manager. “An unmanned technology infrastructure staged below the oceans’ surface could relieve some of that resource strain and expand military capabilities in this increasingly challenging space.”


Developments in Mining by lawofsea