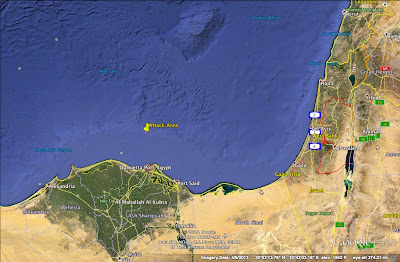 
The Egyptian armed forces destroyed four “hostile” boats containing what the military called “terrorist elements,” and arrested 32 people off the coast of Damietta governorate, the military said in a statement on Wednesday night.

“Hostile vessels” opened fire on an Egypt navy boat while it was on patrol, the military spokesperson’s office said on Wednesday. An exchange of gunfire took place between the “terrorist elements” and the navy, who had called for back-up forces.

According to state-owned media, four of the attackers were killed during the clashes. The military has not yet confirmed.

One navy boat was set on fire, and five navy personnel were injured and taken to a military hospital. The military also stated that eight of its navy personnel are missing and military forces are currently searching for them.


It was not immediately clear what the naval boat was doing so far offshore, and whether it was on a routine patrol anticipated by fighters.

A military source told the AFP news agency the attackers used "fishing boats" and did not appear to have deployed rocket propelled grenades or heavier weapons.

The Mediterranean Sea is used by drug traffickers and illegal migrant smugglers who have been intercepted by the Egyptian navy in the past.

There have been no recorded attacks at sea by the Sinai-based armed fighters who launched an insurgency after the army overthrew President Mohamed Morsi last year.

And more, including "analysis" at BBC News:


If this was a militant attack in the Mediterranean, as the Egyptian army has said, then it's the opening of a new front.
***
The incident happened north of the port of Damietta, where armed people traffickers are known to operate. Did they clash with the navy to protect their lucrative trade?

Map with icon on it is my guess of where the incident occurred. Don't bet on its accuracy.

Email ThisBlogThis!Share to TwitterShare to FacebookShare to Pinterest
Labels: Attacks at Sea, Egypt