On Midrats 23 November 14: "Episode 255: Commanding the Seas -the Surface Force with Bryan Clark from CSBA" 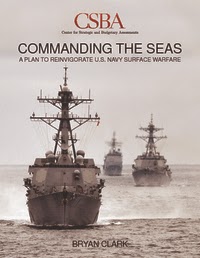 Please join us on Sunday, 23 November 2014 at 5pm (US EST) for Episode 255: Commanding the Seas - the Surface Force with Bryan Clark from CSBA


How do we build the future surface fleet to ensure our forces maintain the ability to access to all regions of the world's oceans that our vital to our national interests?

Our guest to discuss this and the broader issues related to our surface forces will be Bryan Clark, Senior Fellow at Center for Strategic and Budgetary Assessments (CSBA).

A basis for our conversation will be his recent study for CSBA, Commanding the Seas: A Plan to reinvigorate U.S. Navy Surface Warfare, where he articulates the operational concept of “offensive sea control” as the new central idea to guide evolution of the U.S. surface force. This idea would refocus large and small surface combatant configuration, payloads and employment on sustaining the surface force’s ability to take and hold areas of ocean by destroying threats to access such as aircraft, ships and submarines rather than simply defending against their missiles and torpedoes.

Prior to joining CSBA in 2013, Bryan Clark was Special Assistant to the Chief of Naval Operations and Director of his Commander’s Action Group.

He served in the Navy headquarters staff from 2004 to 2011, leading studies in the Assessment Division and participating in the 2006 and 2010 Quadrennial Defense Reviews. His areas of emphasis were modeling and simulation, strategic planning and institutional reform and governance. Prior to retiring from the Navy in 2007, he was an enlisted and officer submariner, serving in afloat and ashore including tours as Chief Engineer and Operations Officer at the Navy’s nuclear power training unit.

Join us live on Sunday or pick the show up later by clicking here. You can also find this show after the live feed on iTunes here, along with its 254 predecessors.
Posted by Mark Tempest at 11/21/2014 11:17:00 AM