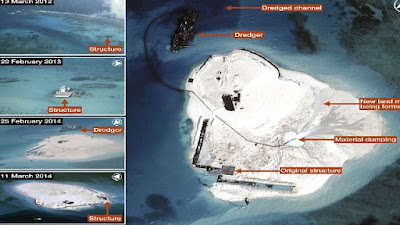 
China has moved weaponry onto artificial islands that it is building in contested areas of the South China Sea, adding to the risks of a confrontation with the United States and its regional security partners including Australia.

Australian officials are concerned that China could also introduce long-range radar, anti-aircraft guns and regular surveillance flights that will enable it to project military power across a maritime expanse which include some of Australia's busiest trading lanes.

Well, it's not like we didn't know this was coming.

I suspect the reaction will be more hand-wringing, strong memos and some increase in overflights while China consolidates its positions. Why? As stated here:


When a land power wants to set up locations for bases to control the air and sea in areas of interest to them ...

China is thinking like a land power, setting up fixed bases for expansion of its alleged rights in the South China Sea.

It will keep doing this until it has a reason to stop. The threat of "international law" is a joke to China, which knows that international law means little unless there is some means - and the will to use that means - to enforce it.

Are the U.S and/or any of its allies willing to go to war to stop China's island campaign? Will we send in the Marines to dig the Chinese off these sand spits?

China, acting in its own interest as it sees it, understands the "paper tiger" nature of threats rendered impotent by politics, thus they will keep going at this until they have their own South China lake.

Can you imagine the protests about "our kids" going off to war over man-made islands in the middle of nowhere?"

In their defense against U.S. protests they will point to the Monroe Doctrine, the events that lead to the Panama Canal and centuries of European imperialism. Given their history, they probably won't use "Greater East Asia Co-Prosperity Sphere" as the title of their empire building effort - but whatever they call it, it follows a similar thought process.


You might note the mention of the Monroe Doctrine:


In 1962, the Monroe Doctrine was invoked symbolically when the Soviet Union began to build missile-launching sites in Cuba. With the support of the Organization of American States, President John F. Kennedy threw a naval and air quarantine around the island.

I don't know what the Chinese equivalent of "goose/gander" is, but I suspect we'll hear it at some point.