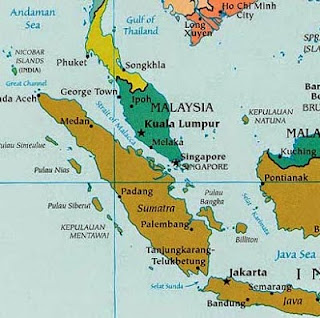 
The navies of littoral states Indonesia, Malaysia, and Singapore are in talks to extend joint patrols to the lower reaches of South China Sea in a bid to curb piracy.

Rear Admiral Lai Chung Han, chief of the Republic of Singapore Navy (RSN), highlighted some of the challenges in conducting these joint patrols such as competing territorial claims in these waters.

"There is concern with the proximity to the contested claims of South China Sea, and we certainly don't want those issues to be conflated. We are very focused on dealing with the piracy situation and none of us really benefit from letting this situation fester," said Rear Adm Lai.

He also does not rule out the possibility of collaboration between certain militant groups and pirates in attacking Western economic interests at strategic sea lanes such as the Strait of Malacca.

"Of course when there is any doubt, we never rule out the possibility that the pirates on board, or the ship that has been commandeered, could also be used for terrorist purposes, and we have the means to deal with that," added Rear Adm Lai. 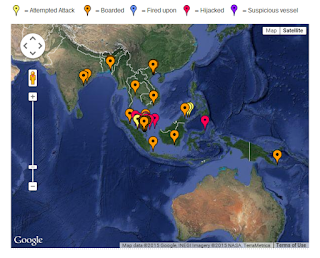 There is already in place an agreement covering the Strait of Malacca. This new agreement would allow expansion of the area covered apparently into areas impacted by small tanker hijackings.

As you can see from the nearby image from the ICC's International Maritime Bureau's Live Piracy Map pirate attacks in the area are common.
Posted by Mark Tempest at 5/12/2015 01:29:00 PM