Iran Strikes Back II: Lawfare and the Iranian "Ship-napping" 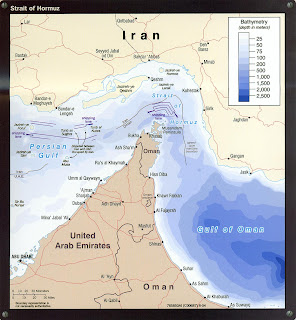 A couple of good legal analyses of the Iranian grab of the chartered vessel Maersk Tigris (as initially discussed at Iran Strikes Back: "Iranian Navy fires at, boards commercial container ship").

Both are worth reading to get a flavor of how Iran is attempting to mask the issue of its illegal "ship-nap" in a flurry of legalistic mumbo jumbo.


Even assuming that the regime of innocent passage applied to the Maersk Tigris, however, Iran’s seizure was still unlawful. Tehran is trying to replace the package deal of the law of the sea with a cafeteria-style selection of favored provisions and rejection of others that benefit and protect the international community. This conduct is of a familiar style and pattern for the regime in Iran, and an indictment on its ability to implement international law in good faith.


. . . . Iran’s seizure clearly violates international law, and one might add, a branch of international law that is ordinarily well-respected, and quite fundamental for global commerce. Moreover, no maritime lien gives Iran any authority to detain the crew.

Given the flagrant breach of international law, there seems to be a surprising silence from the “international community” and proponents of global governance. . . .

Well, illegal it may be, but Iran holds the trump card - it has the ship and its crew.

It also has its own courts to rule on its actions in grabbing the ship. And it knows, as I pointed out in my first post on this matter, that that no one, including the U.S.


is ready to go to shooting war over this sort of action.

In its asymmetric battle against the "west", Iran is compelled to lie about almost everything, almost all the time. Clearly, Iran has its internal reasons for some of the embellishments it puts on the matters it is involved in. If they manage to fool a few Westerners along the way - well, so much the better. Grabbing ships at sea - that requires a new level in lying. Sort of a "step up" in bald-faced prevarication. Much like Putin in Russia . . .

But just like the "lawfare" being waged by the Chinese in the South China Sea or, on occasion, by the North Koreans, this new asymmetric approach is like the "big lie" practices of past thugs and dictators - meant to fool most of the people, most of the time, while concealing the mean spirit that animates it. If you like, it's nibbling around the edges of real war.

In the case of the Strait of Hormuz, it now mandates an active escort system for U.S. flagged ships. And that means more work for an already too small fleet.  Those U.S. Navy patrol ships in the photo above are being used as escorts. They are about 20 years old and will need replacing soon.

By its actions, Iran has set up a very dangerous environment in which a shooting war is more likely.

All couched in nice legalistic nonsense.

Email ThisBlogThis!Share to TwitterShare to FacebookShare to Pinterest
Labels: Big Lie, Fun with Iran, Law of the Sea Treaty, Lawfare, Strait of Hormuz