Confirmation the Middle East is, and will remain, a mess: "The Trio of the Serious" 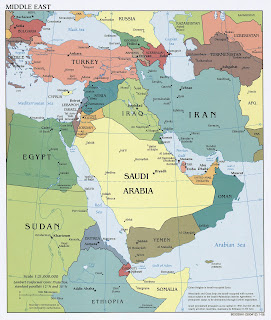 If you need confirmation, that is, here's a piece from American Diplomacy: "The Trio of the Serious" that puts Israel, Turkey and Iran as that "trio" -


So what do these three have in common? “Not much” is a comment immediately springing to a reader’s mind. All three countries to various degrees officially loathe, fear and/or rival each other. The polities of all three could not be less similar. Iran is a theocracy where elections can and do matter. Israel is a boisterous if fragmented democracy. Turkey is an increasingly flawed and authoritarian democracy. All three face internal strains which could jeopardize their futures.

If those are the big three, oh my.

Nice bit on corruption and governance:


. . . while trying to grope one’s way through the tangle of loyalties afflicting this region, must one forget the pervasive evil which exasperates ordinary people more, perhaps, than anything else—lack of government competence. The governments in the region by and large just do not produce the range and quality of services people increasingly have come to expect: security first of all, then jobs and income, and education and health services.

Instead they are faced in daily life by ugly and demeaning corruption. There is no point in dwelling too much on the competitions of relative ugliness produced by Transparency International or others. In whatever form corruption comes it saps at societies. Arguably it was as important as any other factor in provoking the Arab Spring. Important is the degree to which corruption, in any given state, impairs that state’s capacity to deliver security and other services to its people. And right now Middle Eastern governments, with budgets stricken by collapsing oil prices, now have less money to grease the hands of popular discontent. This phenomenon too is largely due to the lack of basic government or administrative competence.

You know, if your daily life sucks, it just might be easier to become a nihilistic radical. Perhaps that is why so many losers from western countries are flocking to defend their version of Islam from other versions of Islam and other ideas.

Of course, when everyone involved avoids responsibility by blaming all problems on someone else ("It's America's or the Crusader's or the West's or your favorite enemy's fault") it just adds another level of intolerance to the mix.
Posted by Mark Tempest at 5/26/2015 11:01:00 AM

Email ThisBlogThis!Share to TwitterShare to FacebookShare to Pinterest
Labels: The Mess in the Middle East