Kick off the Memorial Day Weekend - mindful that many Americans died fighting helping to free China during WWII - by suggesting a couple of reads on China.


Ask ten China scholars to define Chinese grand strategy and you will get ten answers. In a formal sense, it does not exist. Yet observers can discern coherent strategic priorities that, in aggregate, resemble the elements of a grand strategy. Today, the first priority is arguably driven by the Communist Party’s preoccupation with mitigating key vulnerabilities in pursuit of stability and growth.
***


Externally, Beijing is keenly sensitive regarding the vulnerability of the energy imports that sustain China’s economy, the bulk of which must traverse thousands of miles of open sea patrolled by the U.S. Navy and through the narrow naval chokepoint at the Strait of Malacca. The naked vulnerability of these imports (particularly in war time) is intolerable to Chinese strategists.

The goals of Chinese grand strategy can therefore be assumed to be attaining diverse and defensible sources of energy and rapid economic growth bolstered by a healthy supply of export markets in an increasingly connected Asia.

The AIIB [Asian Infrastructure Investment Bank] has the virtue of advancing both agendas, but it represents just one finger in a Chinese hand grasping Asia in an ever-tighter embrace. China’s “String of Pearls” investments in port facilities along the Indian Ocean rim represent another. Just this past February, a Chinese state-owned enterprise assumed control of the “crown pearl,” Pakistan’s Gwadar Port. Another finger is the web of new oil and gas pipelines from Myanmar (also called Burma) to Kazakhstan, and new industrial and commercial rail links spanning from Western China to Europe. Last year a Chinese cargo train made the longest continuous train ride in history, a 21-day, 8,000-mile round trip from China’s Zheijang province to Spain and back. Meanwhile, Russia and China are currently negotiating the details of a largest-ever gas pipeline and supply contract worth up to $40 billion. Finally, Beijing is still unveiling the details of a “One Belt, One Road” New Silk Road Initiative, an ambitious vision for an interconnected Asia with each spoke linking back to the hub of the Chinese economy. 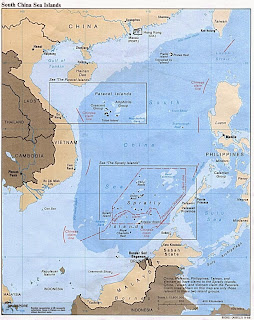 As the article notes, China has a nationalist movement that is unhappy with things that happened during China's weak years and that anger leads directly to efforts to "get back" that which this movement feels was "stolen." One symbol of this effort is the infamous 9- or 10-dashed line which China uses to justify its actions in the South China Sea.

As far as strategy goes, China is not straying too far from a Mahanian approach (see Mahan’s Naval Strategy: China Learned It. Will America Forget It?).

The other big read is from the Council on Foreign Relations, Robert Blackwill and Ashley Tellis authors, Revising U.S. Grand Strategy Toward China , which is downloadable as a pdf:


"Because the American effort to 'integrate' China into the liberal international order has now generated new threats to U.S. primacy in Asia—and could result in a consequential challenge to American power globally—Washington needs a new grand strategy toward China that centers on balancing the rise of Chinese power rather than continuing to assist its ascendancy."

Is China a boogie man or just a major country asserting its will in a world where other major powers have risen and fallen? Does China's ascendance require confrontation? What is "international law" but the will of the strongest glossed over as "proper behavior?" Will the behavior of past "western" empires come back to haunt their descendants?

It also might be a good idea to read Huntington's The Clash of Civilizations (book available here) as well as critics of that work (see e.g. here). Another approach to ponder, John Mearsheimer's The Tragedy of Great Power Politics. There's also, perhaps more directly on point, Henry Kissinger's On China.
Posted by Mark Tempest at 5/22/2015 10:34:00 AM