The "official" start date of hurricane season is June 1, but most of us who live along the Southeast U.S. seaboard know that that is an "iffy" date. 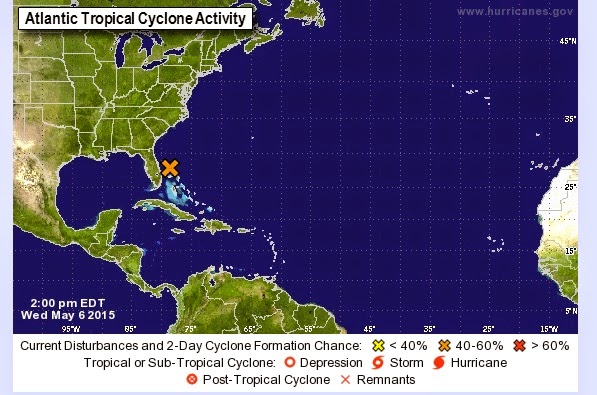 In May 2015, for example, we now have some sort of "A subtropical or tropical depression or storm" kicking off northwest of the Bahamas as shown in the adjacent image.

It's a good idea to visit the National Hurricane Center and keep an eye on such storms - you might get the NHC early "estimates" of storm activity:

For the North Atlantic...Caribbean Sea and the Gulf of Mexico:

Disorganized showers and thunderstorms extending from the east coast
of Florida across the Bahamas and the adjacent Atlantic waters are
associated with an upper-level trough and a weak surface low located
north of the northwestern Bahamas. Conditions are expected to
become gradually more favorable for development over the next day or
so while this system moves slowly northward and then northwestward.
A subtropical or tropical cyclone could form by tomorrow or Friday,
and interests along the southeast coast of the United States should
monitor the progress of this system through the weekend. Regardless
of development, heavy rain is possible over portions of the coastal
southeastern United States beginning tomorrow. The next Special
Tropical Weather Outlook will be issued on this system by 8 PM EDT
today. ...
* Formation chance through 48 hours...medium...60 percent
* Formation chance through 5 days...medium...60 percent 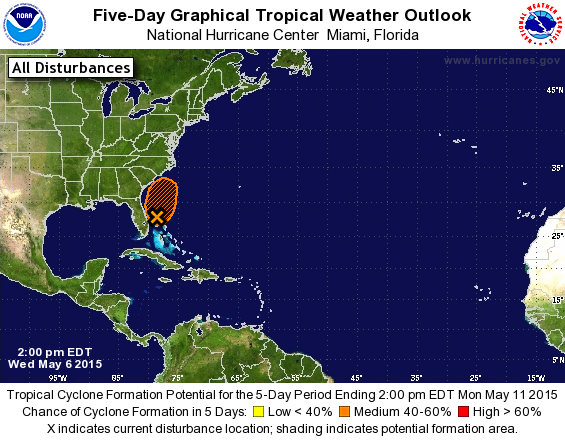 While the NHC is pretty good, long range weather predicting is a combination of science and art, so they have to provide probabilities instead of certainties. But they do produce a "Five-Day Outlook" that might be useful to you for planning purposes.

Based on the nearby graphic,  if you were planning a beach outing in South Carolina or on the Outer Banks for the weekend, you might want to pay close attention.

More to purpose of this series, the National Hurricane Center is a valuable resource with which you ought to become familiar if you live in a potentially affected area.

Update on NHC Products and Services for 2015