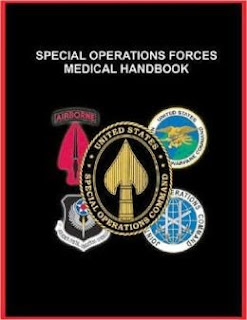 We all know there are relatively small disasters - your house burns down, a part of a city floods, a tornado takes out a neighborhood. Then there are those potentially "really bad major disasters" where everything we know sort of -uh- stops - an electromagnetic pulse shuts down the grid, a meteor fills the air with debris around the world, or Yellowstone blows up.

In the former case, the resources of medical centers, hospitals and their associated facilities will mostly remain intact - if not in your town, then someplace fairly close.

In one of the latter worst cases, you might be on your own for medical treatment, at least for some period of time.

A useful tool to have available on a thumb drive or an "SD card" and kept in your EMP safe container (see here) is the Special Operations Forces Medical Handbook available in pdf format.

You could even print it out if you are a "belt and suspenders" type though it does run 723 pages. The pdf has a nice index and the pictures are, in some cases, colorful. The issue above is from 2001. Amazon offers a paperback version updated through 2008 here  for about $16 new. Used versions are cheaper.