Most of the time I use a Mac Mini or Chromebook.

Macs and Chromebooks are really easy to use and to get working.

But every now and again I need to use - gasp - a "Windows machine" for stuff. So I keep a Windows laptop about.

Yesterday my old Windows laptop blew up its video card. 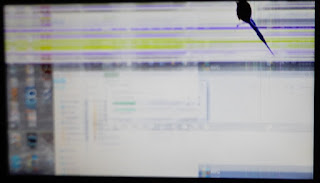 I could recover some the the more important things I keep only on that machine but a bad video card that hasn't completely gone out makes for a ill-focused, jumpy screen and slows down the process of retrieving things.  I managed. At least it wasn't a total blue screen of death.

Having received a birthday Best Buy gift card from one of my kids, I trotted down to the local store to see what I could do to replace the wreck. I got a nice deal on a bigger, better machine than I had. I added some more RAM because its a Windows 10 machine and I have learned that 4 GB of RAM just ain't enough for that OS.

Here's the thing, though, this new modern machine was not "plug in and go to town." Nope, you've got a few hours of updating Windows 10, coupled with adding manufacturer software fixes to things Windows 10 causes not to work right - like the touch pad, which seems to me to be necessary for good operation of the machine.

Ah, well, after roughly 10 hours of screwing around with it, I think I've got it where I want it. A few hours during which I was glad I had other computers to see how to deal with the glitches. Lord knows what a person with only that one computer does to get the advice needed to get things running right.

I would like to express my appreciation of those folks who post their "how to fix this problem" solutions on the internet.

Naturally, this was followed by intense desire not to look at a computer of any kind for a little bit.

And a new sympathy for the folks trying to make the computer stuff on the F-35 work.

Email ThisBlogThis!Share to TwitterShare to FacebookShare to Pinterest
Labels: Not So Much Humor, Technology Adrift