West African Pirates and Kidnappers Still Active, But Enforcement is Catching Up

Report from Africa Times on 8 Feb 2016, "Nigerian Navy thwart hijack" reminds us that, though
there has been a significant decrease in piracy off East Africa, there is still stuff happening off West Africa:


The Nigerian Navy has thwarted an effort by suspected pirates to hijack and capture 25 foreign nationals who were on board a Maersk merchant ship which was carrying cargo to Port Onne, Nigeria. The crew were made up of mixed nationalities eight South Africans, eight Philippines, five Indians, two Thais and two Britons. 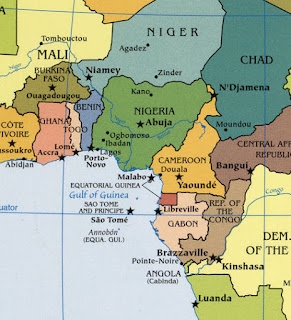 The Executive Officer of the Nigerian Navy Ship (NNS) Pathfinder, Olusegun Soyemi, told journalists on Sunday said that the vessel has docked safely and those on board were uninjured, reported Premium Times.

Soyemi told journalists that at eight in the morning on January 5, the ship, Safmarine Kuramo, was attacked by pirates.

“We got may-day distress call that the ship was boarded by unconfirmed number of sea pirates after entering the nation’s territorial waters,” Soyemi said.

“We immediately dispatched a warship (NNS Centenary) and attack gunboats led by Navy Capt. Chiedozie Okehie of the Eastern Naval Command to rescue the situation.

“The sea pirates apparently on sighting advancing naval troops fled the scene for fear of being arrested by our operatives.
***

Before this latest event, there was this 3 Feb 2016 report "Nigerian separatists hijack ship, demand release of leader":


Nigerian separatists have hijacked a merchant ship and threatened to blow it up with its foreign crew if authorities do not release a detained leader agitating for a breakaway state of Biafra, military officers said Tuesday.

Maj. Gen. Rabe Abubakar, the Defense Ministry spokesman, confirmed the hijacking occurred on Friday and called it “an act of sabotage.” He did not tell reporters the name of the ship.

Abubakar spoke on Monday. Other officers on Tuesday told The Associated Press that the navy is in pursuit of the captured vessel. The officers, who spoke on condition of anonymity because they are not authorized to speak to the press, said the hijackers have given the government 31 days to free Kanu or say they will blow up the ship along with its crew.

Maritime industry reports indicated the vessel was an oil tanker seized about 100 miles (160 kilometers) off Nigeria’s Bakassi Peninsula, along Nigeria’s southeastern Atlantic Ocean coastline, near the border with Cameroon.

“The group boarded the tanker from two fast boats and took control over the vessel and locked the crew in the mess room” before heading for the Niger Delta, the Bulgarian-based Maritime News reported.


In an apparently unrelated development, pirates seized the Greek-owned chemical tanker MV Leon Dias off Nigeria’s coast, according to an official of the Nigerian Maritime Administration and Safety Agency who insisted on anonymity because he is not authorized to speak to reporters. He said it was hijacked on Friday, other reports said Sunday, and diverted to an oil terminal off Cotonou, capital of neighboring Benin. Maritime News said the chief officer was seriously injured and is being held hostage with four other seamen.


The navy of Benin is guarding an oil tanker hijacked by militants who are holding five crew members hostage in Nigeria, Nigeria’s navy and a shipping security expert said Wednesday.

The hijackers disembarked from the vessel on Sunday and took five hostages with them — the captain, chief engineer, third engineer, the electrician and a fitter, said Dirk Steffen, maritime security director of Denmark-based Risk Intelligence. The ship then sailed to Cotonou, he told the AP.