Must Read: Holmes on China 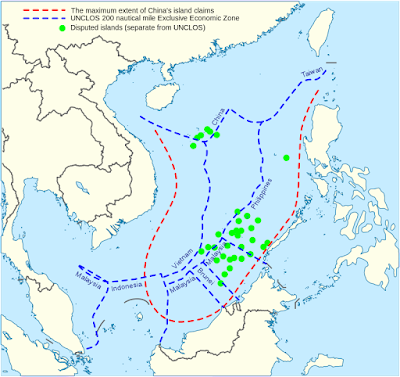 
Holmes: The Chinese have been very forthcoming with us about what their aims are. I'm not sure that there's a lack of transparency at all. They've told us face to face, including in meetings here in Newport [at the Naval War College] that they want to set the terms of access to the waters and the skies they claim as their own. That's very straightforward and it conforms pretty much ideally to what they have actually done over the past five years since they seemed to have cast off their soft power offensive – their charm offensive towards the region.

On President Obama’s “pivot” to Asia, Holmes pulls no punches:

Holmes: The metric that President Obama and his advisors have put out is that the United States is going to a 60-40 split [of ships] between the Atlantic and Pacific fleets. But if you look at what ten percent of the United States Navy is going to the Pacific, a lot of it is a lighter combat and literal [sic] combat ships. These are not high-end combat assets. So it's a little bit misleading -- and also the pivot is happening very slowly as well. So as diplomatic signals go, as deterrence signals go, this is a pretty Bush{sic] league thing.
****
Holmes: The Chinese have been very adept and I've actually been rather impressed with their ability to have a truly maritime strategy. A truly maritime strategy incorporates not just navies but also shore-based hardware – aircraft, missiles, and so forth. It also incorporates law enforcement assets; and for the Chinese, it also includes the fishing fleet. These things that we would think of as commercial vessels – they act as an unofficial arm of Chinese sea power at times.

I think the asymmetry between white hulls and gray hulls is very important. The Chinese are very deft at using these coastguard cutters to essentially stake their claims. These are police assets. The other coastguards reigning in the South China Sea are not nearly big enough or strong enough to stand up to even the China Coastguard.

So if you think about the dilemma that it would put the Philippines or Vietnam or any of these other nations in to counteract these China Coastguard patrols, they would have to use naval force and if it came to shooting, who's going to look like the bad guy? So that's a serious asymmetry that we are still coming to terms with and trying to figure out how, how do you counter such a strategy.

In the face of China’s white-hulled strategy, one of Holmes big concerns is the lack of pushback by a US hamstrung by a shrinking navy. Here, Holmes sees China strategy of expanding its authority as an attempt to establish its own Monroe Doctrine for Asia...

I encourage you to read the whole piece and watch the video at the above link.

As I have noted before, China has the "neighborhood bully" syndrome writ large and hopes to present the world with a fait accompli of "ownership" of the Souh China Sea. The weakness demonstrated by the U.S. in the face of China's actions serves only to assure China's leaders that they are punching a paper dragon.

It doesn't help that  our senior leadership has an very ivory tower, law professor-ish view of the world that seems to  believe that the rule of international law can be enforced through "understandings," vague "agreements" and quasi-treaties, instead of by the willingness and ability to apply proportionate (and perhaps more than proportionate) force to deter bad actors.

In short, to borrow a phrase from Chairman Mao, ""Political power grows out of the barrel of a gun." - a concept well understood by the Chinese leaders.