Drawing Red Lines: North Korea Tells Us It's at War with Us 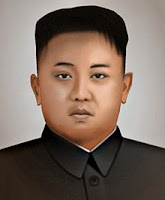 North Korea's top diplomat for U.S. affairs told The Associated Press on Thursday that Washington "crossed the red line" and effectively declared war by putting leader Kim Jong Un on its list of sanctioned individuals, and said a vicious showdown could erupt if the U.S. and South Korea hold annual war games as planned next month.
***
Han said North Korea believes the nature of the maneuvers has become openly aggressive because they reportedly now include training designed to prepare troops for the invasion of the North's capital and "decapitation strikes" aimed at killing its top leadership.

I don't see any reference to a "sea of fire," though.

Email ThisBlogThis!Share to TwitterShare to FacebookShare to Pinterest
Labels: DPRK